Mark Amerika has been named a “Time Magazine 100 Innovator.” His FC2 books include Sexual Blood and The Kafka Chronicles. He was interviewed by T. J. Dietderich. 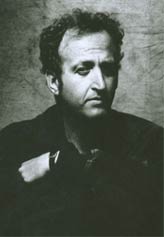 On your web site MarkAmerika.com there are tons of examples of projects you’ve worked on, and print books seem to be a very small part of your overall work. Could you talk to me a little about virtual art, and what you’ve done with (what I guess you’d call) programs like GRAMMATRON and FILMTEXT?

Sure — although I would not want to leave the impression that my print books are a less significant part of my total oeuvre. The truth is, my print books, especially those published by FC2, I hold near and dear to my heart. And I think they are multimedia objects too, not just books. They play with the visual interface of the page as well as the sound/audio potential of language. The Amerika-At-War section of The Kafka Chronicles is every bit as multi-media and virtual as my recent DVD/surround sound piece “Chromo Hack” is. The latter work does, however, expand the concept of writing so that the language of new media art incorporates found sound and imagery into the mix and gets displayed in a dark room with two vertically mounted plasma screens and a surround sound system. But the “script,” if I can call it that, is still modeled after the same writing methods I used in my two FC2 novels. Both novels, as well as GRAMMATRON and FILMTEXT, and my installations like “Chromo Hack” are actively engaged with remix culture and the pseudo-autobiographical narratives that make up the bulk of my work.

The GRAMMATRON project consists of over 1000 web pages, thousands of hyperlinks, an original soundtrack of over 40 minutes, a unique navigational structure composed using specially coded Javascripts, and a virtual gallery consisting of scores of digitally animated video loops and still images. The work was created exclusively for the World Wide Web and is a retelling of the popular Golem myth from the ancient Cabala. The narrative of GRAMMATRON depicts a near-future world where stories are no longer conceived for book production but are instead created for a more networked-narrative environment that, taking place over the Internet, calls into question how a narrative is composed, published and distributed in cyberspace.

Because GRAMMATRON was not officially released until the Spring of 1997, most web mavens assume that its development came after the official launch of Alt-X in the Spring of 1993, but this would be a wrongful assumption.

In fact, GRAMMATRON, as is the case with most of my net art, began as a series of paper jottings and doodles in January/February of 1993 and started becoming encoded (translated for the screen) on April 3, 1993. The date is important because it means that GRAMMATRON was moving into encoded screenal space just days before the official launch of the beta-version of Mosaic, the first graphical user-interface (GUI) web browser.

The first scribbled note for GRAMMATRON says: “a multi-media, virtual reality, writing machine, that translates your experience for you AS you experience it.”

FILMTEXT was recently described by one of my collectors as the obvious next stage after my novels and GRAMMATRON. Created in the tradition of filmmakers such as Dziga Vertov, Jean-Luc Godard, Maya Deren, and Chris Marker, the online version of FILMTEXT attempts to translate cinematic language into more multi-linear navigational forms associated with emergent new media genres such as net art, hypertext, and motion graphic pictures.

The manipulated images used in this work of digitally expanded cinema were shot on location at the Haleakala Crater, a vast desert landscape atop a dormant volcano that reigns high above the South Pacific on the island of Maui. Other significant video location shoots took place in the Australian Outback as well as in the dynamic urban zones of Tokyo, Japan, and Hong Kong, PRC. Each of the video shoots required extensive research, travel, technical training, and coordinating a small crew of assistants.

Besides experimenting with recently released digital video hardware and software technology, FILMTEXT is more importantly a fictional investigation of what it means to be human in a post-apocalyptic media environment. Borrowing from pop culture genres such as science fiction, cyberpunk, and interactive game environments, the work concerns itself with the idea that “language is a virus” (William Burroughs) and investigates the nature of computer, biological, and media viruses via an abstract expressionistic interplay between the semantic imagery, the audio loops, and the various cryptic texts embedded in the design interface. The work invites the interactive-participant to navigate their way through an ambient game space where “going to the next level” never guarantees anything except the opportunity to produce new versions of the work you are navigating your way through. In this regard, FILMTEXT is a philosophical investigation that plays with the animated Internet environment and its supposedly liberating potential to help free us from some of the encumbrances of material reality.

You’ve also founded an online publisher, Altx.com, where readers can purchase digital books or have them printed. Do you believe the e-book is really catching on, that it will replace print books eventually?

I think ebooks are a great addition to the publishing world. I prefer not to be the one who says they will replace print books. Print books are valuable and will still be around for quite some time. But things are changing fast. The biggest challenge ebooks pose for print publishing is the economic model. Think how hard it is to sustain a press like FC2, even though there is an audience for this work. At Alt-X, our ebooks have enjoyed over 100,000 downloads. That does not mean every download has translated into a reader of the entire book they downloaded — just like buying a book does not mean the person who bought it will read it. So that’s a given in both markets. But 100,000, with our top titles in the 30–40,000 range, that’s an audience that matters. The ebooks are taught in classes all around the world and this too has value in the literary and scholarly communities of interest evolving around this new media writing practice. Having said that, there are a few genres of ebooks starting to emerge: one is modeled after the print model, and is downloaded only to be printed up as a stack of pages. The other is a more screen-based artist ebook that experiments with multi-media writing. I teach a course called Electronic Writing and Publishing where one of the projects is to produce an artist ebook especially for the screen. You can embed movies, photos, sounds, experimental linking systems, etc. Is it still a book? What does it mean to create experientially designed literary events? These are just a couple of the questions we are asking in my art-research lab at CU-Boulder (former home of FC2, by the way!).

You’ve already fused music, writing and digital media into huge art projects. Do you find that multi-media art can add to works of fiction? More generally, what do you see in the future of the narrative?

Think of it this way: how do we get the narratives to where the people are? My sense is that a lot of our audience is on the net, using smart mobile phones or PDAs, and have some kind of DVD entertainment set up at home. So why not create interactive literary work for the art-enabled devices? Pound said “make it new” and to “charge language to the utmost possible degree.” Rimbaud suggested that “to each being several other lives are due.” And William Carlos Williams saw the poem as small or large machine made of words. Is it possible that the writer of the future is a quick-change performance artist who employs the language of new media to get the narrative updates to you wherever you are?

Back to your printed work: The Kafka Chronicles and Sexual Blood are said to have achieved a cult status. With the translation of Sexual Blood into Italian, one could say its success is also widespread. Are these two designations mutually exclusive for you?

Nope, not at all. See my avant-pop manifesto at Alt-X. It is possible to be both avant and pop. The trick is in sticking to your art-narrative guns while porting your anti-aesthetic dispositions through the digital pop media. The risk is that the power of your dissonant voice gets muted by the mainstream noise machine, but it’s a risk one has to take if they expect to have any effect at all.

It’s obvious that your digital heritage is very influential to your writing, which feels post-apocalyptic. Is it this background that made your style, a combination of lists, theatrical directions, and vivid yet disjointed narrative, possible?

Basically, I love to experiment with form. A list is a form as is a multiple choice quiz as is a Flash-based animation as is the idea of an mp3 concept album with hyper-liner notes. So I look at these forms and think to myself, how can an improvisatory writing style that plays with the language of new media intervene in their conventional setting and creatively unravel them from within. That methodology has proved to be fruitful because it at once gets us out of the familiar but also — due to the somewhat arbitrary constraints it puts on me as a writer — opens up all kinds of possibilities for new stories to emerge that I had no idea were waiting for their manifestation.

What sorts of new projects are you working on now that you could tell me about?

I have a book of artist writings that deals with all of the above issues and more, and that will be published by MIT Press. I am working on a High-Definition interactive DVD that will be my first serious attempt at what I call digital cinema. And this past summer I finished a long narrative poem made out of spam messages called “29 Inches.”