Kassten Alonso’s first novel Core: A Romance was an Oregon Book Awards finalist in 2005. He has previously published in the Portland Mercury, Portland Monthly, and The Oregonian, and was a contributor to Citadel of the Spirit: Oregon’s Sesquicentennial Anthology, A Merging of Past and Present Oregon Voices and Stories. He lives in Portland, Oregon, with his wife, author Monica Drake, and daughter, Mavis.

Just as the characters found in The Pet Thief are deranged biological recombinants, so is the formidable form of this dystopic novel: worsted, unzipped, reraveled, and hooked. Kassten Alonso frack’s the mother tongue. This book is one mean meaning.

Michael Martone, author of Four for a Quarter 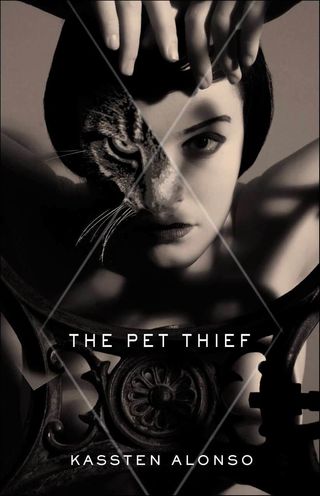 The Pet Thief is a dystopian fable of science, rebellion, humankind’s inhumanity, and the struggle for identity and survival in a post-human world.

When scientists, the government, and venture capitalists conspire to hybridize humans with animals—cats, specifically—for organ harvesting, drug testing, and military applications, the experiment is an irredeemable failure, producing human-like beings with uncanny abilities who are nonetheless fundamentally defective.

Oboy and his mentor/tormentor Freda are two wayward hybrids, “cat people,” who have escaped with others to the depths of a rundown European city being leveled for reconstruction. They are members of a street gang led by an ominous leader called Swan.

Oboy is unable to think or speak except in mimicry, but he is a physical savant, which serves Freda’s mission. Enraged at what has been done to her, Freda wants to “rescue” every pet she can. When Oboy returns with a human baby after his first solo outing, their world and the truths of their existence come unraveled.