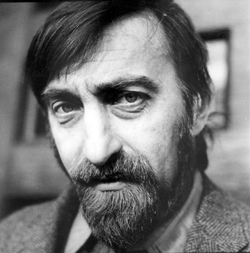 Jonathan Baumbach is the author of numerous books of fiction, including Babble, Chez Charlotte & Emily, Seperate Hours, The Life And Times Of Major Fiction, D-Tours, and B. Also a widely published and anthologized short story writer, he has appeared in O. Henry Prize Stores and Best American Short Stories. He has written about movies for Partisan Review and is a former chairman of the National Society of Film Critics.

Baumbach has more voices than Willie the Whale, more accents than the people at Berlitz, a gift for parody, a detector for cliché. 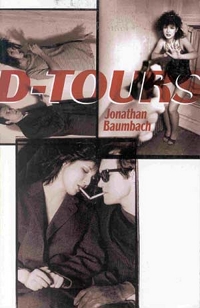 A dying woman, the love of his life, awaits Max, the narrator-hero, in his hotel room while he finds his way back, caught like a sleepwalker in a succession of daunting adventures, contending with, in part, vampires, spies, serial killers, femmes fatales, alien worlds, giant apes, and mad scientists, all the time awaiting the return of his absent memory.

D-Tours is probably not on your itinerary; it is the evasive side-step you take that gets you everywhere. It is the private tour of America you take each night that you never quite shake yourself awake from to remember. Jonathan Baumbach’s wild ride of a novel is a satire and celebration of movie narratives, running them one after another, one into another like fairy tales or cultural jetsam or primal dreams.

In another sense, D-Tours is a kind of 1001 Nights at the Drive-in. And you are there with the narrator-hero, like Scheherazade telling your story in every imaginable variation, because your very survival depends on reinventing the world.

Jonathan Baumbach views the world with the ruthless eye of a movie camera. D-tours contemplates the best and funniest 50-or-so movies I wish I’d seen.

Baumbach tells story after story as if he were sentenced to death and had to talk his way out of it. Baumbach may not be Scheherazade, but he’ll live!

… fraught with … charged moments that the narrative threatens to explode. 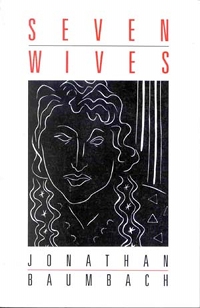 A deliciously satirical postmodern romance, Seven Wives reimagines the search for an enduring passionate love. The too-much-loved narrator, Jack, an extension of the everyman hero of Baumbach’s novel Reruns, marries seven women, including a childhood sweetheart, an older woman who turns out to be an unacceptably near relation, the loveliest woman in the world, a woman so fat that sex with her becomes impossibly difficult, and a woman who confuses violence and love. Jack’s quest for the perfect marriage is, of course, doomed to failure and ultimately leads him to the edge of madness, but it also produces seven bizarrely interesting near-misses along the way.

From his home in New York City, Jack tells his story after the fact, as a way of reclaiming himself. He obsesses not only about his search for the right woman but also about his quixotic pursuit of a version (or versions) of the American dream. Jack moves from cabdriver, to actor, to scriptwriter for pornographic movies, to entrepreneur, to Hollywood producer. Seven Wives treats marriage and career as inseparable pursuits on the same road to success. The two abiding issues of all of Baumbach’s fiction — the erratic workings of the imagination and the even more erratic workings of the human heart — appear in their purest form in his latest novel.

If the mind were to dwell for too long on the ambivalence of love and relationships, one could end up inhabiting the nightmare world of Baumbach’s latest novel. Here, the libido is as dangerous as crack, and nothing that anyone says can be believed. Baumbach’s protagonist is Jack, husband to the “seven wives” of the title, and the plot turns on all the love skeletons he has in his closet. Baumbach … makes matters worse for him by painting the kinds of watery backdrops one finds in mandarin metafiction, e.g., cleverness-for-its-own-sake stuff. This is the opposite of historical fiction; Baumbach just grabs pieces of reality out of the pedestrian consciousness. His style lends itself well to settings of paranoid American noir, a miasma of sunglasses, pistols, and deadpan. For readers who enjoy that ilk, Baumbach delivers a nice, dark magic show.

… fraught with … charged moments that the narrative threatens to explode. 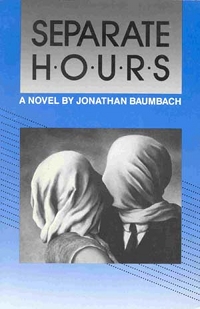 A disturbingly honest, elegantly imagined unveiling of the way truth becomes elusive in a long-term relationship, Separate Hours is a love story about the betrayal of love. Yuri and Adrienne Tipton, both psychotherapists, conduct their separate practices in a shared basement office in an upper Westside New York brownstone. They also share a ten-year-old daughter, a too-comfortable life, an apparently happy marriage, and a connectedness that blurs the edges of their separate identities. Who is telling the real truth? Can either of the novel’s narrators be taken at their word? Adrienne and Yuri tell the story of their life together (and apart), trying to make sense of the darkly irrational. When Adrienne claims that in a movie of their lives, she would be the more sympathetic character, the novel, to test her premise, gives us a possible scenario for the movie. In the further quixotic pursuit of clarity, the novel turns Yuri and Adrienne’s marriage into a case study prepared for a psychoanalytic journal. Separate Hours zeroes in on their marriage and the few things outside that come close enough to get caught in its tentacles. For all the novel’s comic elements, it underlying vision is dark. From the moment of Yuri and Adrienne’s initial meeting, they embrace the conflict. Although they appear to understand what drives them, their behavior for the most part is blindly compulsive and deathbent. Self-knowledge has little impact of how they live their lives. Baumbach’s seventh novel examines a postmodern marriage in crisis, as if it were a “patient etherized upon a table.”

Baumbach employs a variety of narrative voices in his well-crafted new novel, but none of them, he makes it clear, are to be trusted. Obtusely analytical Manhattan psychotherapists Yuri and Adrienne Tipton take turns describing the tortured, slow-motion disintegration of their “relentlessly painful relationship.” Baumbach perfectly captures the bland analysts’ language that disguises scathing verbal abuse as simple observation.

This is Jonathan Baumbach’s most accessible novel and should win him a large readership.

Jonathan Baumbach is far more than the witty biographer of Major Fiction. The fact is, major fiction would be of lesser rank without him.

The Life and Times of Major Fiction 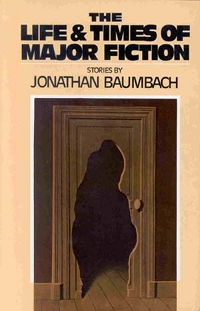 The fourteen stories that make up Jonathan Baumbach’s eighth book of fiction deals with parents, children, love, basketball, billiards, reading, marriage, divorce — the essentials of everyday life which, through the author’s unique strategy of narrative, come to the reader in unexpected ways. Combining comedy and nightmare, these stories distinguish themselves by the charge of their imaginative life, their concern with language, and the play and replay of their form.

“Familiar Games” describes a one-on-one basketball game between a twelve-year-old boy and his mother, a match that evokes a childhood memory of sexual mystery; “Passion?” concerns the disrepair of a marriage that has presented itself to friends and the world as ideal; “Children of Divorced Parents” centers on the problematic career of a filmmaker who, after several failed marriages, continues to pursue the illusion of first love; and the title story, “The Life and Times of Major Fiction,” investigates the mysterious career of a literary confidence man, an impassioned lover of good books, whose life is itself a pastiche of the plots of major fictions.

The Life and Times of Major Fiction is a dazzling sampler of pleasures. Jonathan Baumbach writes gorgeous prose and he has a rare comic/tragic vision, especially of love.

All of the fourteen stories in this collection are very good, and several are perfect gems.

This wonderful book of stories, if only because of its title, invites comparison and then stands the test: this is major fiction.

Baumbach has a real gift for alchemizing fictional “autobiography” into the pure gold of comic terror.

My Father More or Less 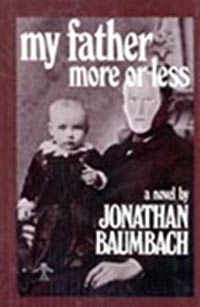 Morris Dickstein wrote (in Harper’s) of Jonathan Baumbach’s previous novel that it “beautifully explores the relationship between what we image and who we are.” My Father More or Less, which deals with the confrontation between an aggrieved eighteen-year-old boy and his estranged novelist-turned-screenwriter father, is a continuing exploration of the fiction making capacities of the imagination.

A brilliant novel … it is playful and unpredictable, a delightful instructive piece of reel life. 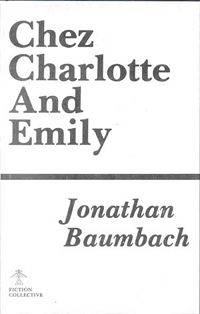 Imagine a bookish man named Francis D., swimming at a public beach in Cape Cod, who drifts out beyond his depth. Imagine that he doesn’t drown, that the tide carries him to a private cove where he is rescued by two mysterious young women named Charlotte and Emily. Imagine then that Francis leaves behind his former humdrum life — his formidable wife and teenage daughter — and embarks on a series of violent and erotic adventures, as dream-like as reels of film. Imagine at the same time that a man named Joshua Quartz is telling his silent wife, Genevieve, the story of Francis’s adventures, that they have little other communication, that the story is a way of keeping contact between husband and wife alive. Imagine that at some point Genevieve tells her own story, within and without Joshua’s account. Baumbach’s characters make occasional connections, make love and war, in the disguises of metaphor. If the main action is dream-like or fantastic, the real world is always at the window looking in.

… a wonderful balance of ease and authority, subtlety and surprise, wisdom and playfulness … the balance is almost magical.

A brilliant novel … it is playful and unpredictable, a delightful instructive piece of reel life.

Touching and wildly funny. Should be read by everyone. 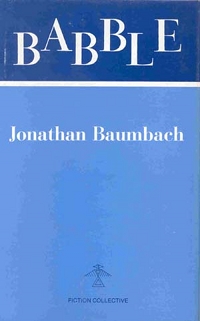 Touching and wildly funny. Should be read by everyone. 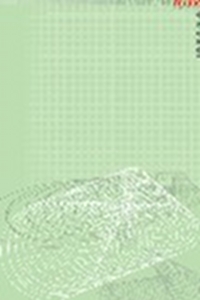 Jonathan Baumbach’s Reruns is the hilarious nightmare of a morose middle-aged filmmaker condemned to reimagine his past in the hope of one day escaping it. This perpetually abashed and variously-named narrator screens his terrors during thirty-three nights of Oedipal farce and unrelieved performance anxiety.

Part inverted bildungsroman, part farce of arrested development, this inaugural release by the Fiction Collective retains its power of hallucinatory exorbitance and lugubrious charm into its fourth decade.

Baumbach’s book succeeds because it is created out of the language and archetypes through which we respond to everyday life.