Born in New York City, Margo Berdeshevsky has traveled the world. She currently lives in Paris, where she is considering conversations with Madame de Sevigne’s ghost who lurks, maybe, in the courtyard. Beautiful Soon Enough received Fiction Collective Two’s American Book Review/Ronald Sukenick award for innovative fiction. Other honors include the Robert H. Winner Award from the Poetry Society of America, The Chelsea Poetry Award, Kalliope’s Sue Saniel Elkind, places in the Pablo Neruda and Ann Stanford Awards, seven Pushcart Prize nominations (and two special mention citations) for works in leading literary journals. Her poetry collections, Between Soul and Stone and But a Passage in Wilderness, were published by Sheep Meadow Press.

Graduated from the High School of Performing Arts, attended Northwestern and New York Universities, she quit for a role in her first Off Broadway play; trained as an actress by Lee Strasberg, she performed in world premieres of Harold Pinter’s “The Basement” and “Tea Party,” David Hare’s “Slag,” worked in the companies of Lincoln Center and Joseph Papp’s Public Theatre, toured the USA as Ophelia, and was nominated for a television Emmy award, for a country western drama in which she had her head in an oven, but was saved by a neighbor who prayed for her.

Margo Berdeshevsky is a mature poet and world citizen … writing with emotional power … woven with extraordinary awareness of what is precisely not beautiful in human life. So much verbal beauty, with the eternal quality of the tale or fable. 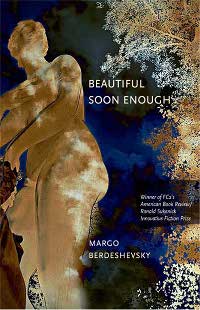 These are snapshots and collages: stories of women on the outside, looking in; of women content to end their affairs; of young women learning the power of seduction; and of older women reminiscing about past loves. They are women who cannot live without love’s embrace, and women who have found it and feel that it is never enough. They are women of a “certain age,” as the French might say, and women with naked hearts, of any age.

Berdeshevsky’s tales cross the planet: from beds in Paris to the roofs of Havana, from Venice Beach to the hills of Dubrovnik. With settings as varied as the characters they depict, these tales illuminate the lives of women desperate for a balance between love, comfort, and freedom. Personal, driven, and lyrical, together they are Beautiful Soon Enough.

Margo Berdeshevsky understands the diabolical complexity of the human heart, and how eros is a form of intelligence as well as a drive. Writing with lyric accuracy and necessary forgiveness about the turmoils of love, she also declares the eighth Deadly Sin: the refusal of intense experience.

With the publication of But a Passage in Wilderness, Berdeshevsky emerges, fully empowered, as the maker of a new poetry that pushes voice & image toward creation of a world “barbaric, vast and wild” that Diderot once saw as marker of what all poetry must be.