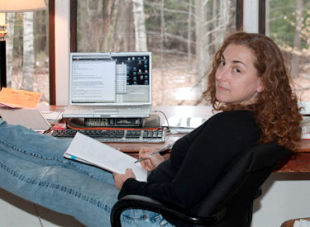 Alexandra Chasin received her PhD in Modern Thought and Literature at Stanford University in 1993, and went on to teach literary and cultural studies at Boston College, Yale University, the University of Geneva, and Columbia University. Chasin’s first book was a work of nonfiction called Selling Out: The Gay and Lesbian Movement Goes to Market (St. Martin’s, 2000), which argued that the identification of gays and lesbians as a target market in the 1990s pulled the gay and lesbian social movement away from radical political goals of sexual liberation and subversion of traditional gender roles and toward more centrist goals like open inclusion in the military and access to marriage.

In 2002, Chasin completed an MFA in Fiction Writing at Vermont College. Kissed By is her first book of fiction. Her next — Brief — was first released as an interactive app. Chasin’s creative work has been published in print in The Denver Quarterly, AGNI, Chain, Post Road, Fence, Unsaid, Hotel Amerika, and The Capilano Review, and online in Exquisite Corpse, DIAGRAM, The New Orleans Review, and htmlgiant, among other places.

Chasin received a 2012 fellowship in Fiction from the New York Foundations for the Arts, and a 2013 fellowship from the Leon Levy Center for Biography at CUNY to work on a nonfiction treatment of the origins of drug prohibition, starring Harry J. Anslinger, the first commissioner of the Federal Bureau of Narcotics. She is Associate Professor of Literary Studies at Lang College, The New School.

Chasin is also Director of Writing On It All, a public participatory writing project based in NYC. 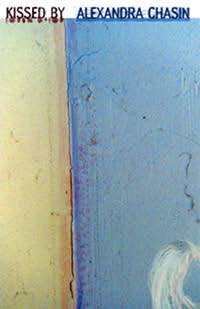 In this remarkable collection of linguistically acrobatic fictions, Alexandra Chasin employs forms as diverse as cryptograms and sentence diagrams to display a prodigious talent that is visual as well as verbal.

In one story, the words are arrayed on the page like troops, embodying the xenophobic image of invading armies that animates the narrative. Another story incorporates personal ads, and another is organized alphabetically, while yet another leaves sentences unfinished. A number of Chasin’s stories take metafictional turns, calling attention to the process of writing itself. The last piece in the collection plays with genre distinctions, including an index of first lines and a general index. From the highly political and well-wrought montage about September 11th to a sexual romp that proceeds by punning on philosophers’ names, Chasin’s work playfully explores the curious and often contradictory qualities of language. Treating love and loss, sex, desire, and war — among other things — and set in New York, New England, California, Paris, and Morocco, these tales are narrated by men and women, old and young, gay, straight, and bisexual; one narrator is not a person at all, but a work of art. Each of these deft, playful, and sometimes anarchic fictions is different from the others, yet all are the unmistakable offspring of the same wildly inventive imagination. Chasin’s diction is precise and purposeful, yet it retains a colloquialism that enables a dialogue with the reader. Humorous and heart-wrenching, often all at once, Kissed By offers the sort of acute insight evoked through the interplay of empathy and intellect.

Formal adventurousness, anarchy, wordplay, and intellectual sophistication hellip; there is a great deal of authority in this writing &hellip superb.

Until I read Kissed By, Alexandra Chasin’s marvelous collection, I never understood what the term “experimental fiction” really meant. Now I get it. Chasin enters each story as if it’s her laboratory. She has the great gift of being able to bring us along on her investigation; she seems to hold up each sentence for our inspection. It’s thrilling to watch Chasin as she pours her chemicals to find out what will fizz and what will explode.

A tour de force of pieces about love and longing and language, but mostly longing, deferred desire at both a thematic and structural stratum … beautiful narrative mutations … bright, whimsical linguistic wrenchings … luminosities …

With an alchemy entirely her own, Alexandra Chasin turns indexes into poetry, flips love inside out, and fixes her dissecting, tender gaze on both the minutiae and vastness of the world. Strange birds, these stories, to show up in your neighborhood — and how they sing.