Andrée Connors was a poet and novelist. A celebrated figure, her work and her life are the subject of a permanent exhibition in the Mendocino County Museum.

Andrée Connors has written a novel so precise and powerful, as an image, that it will help us create a whole new anthropological view of ourselves. 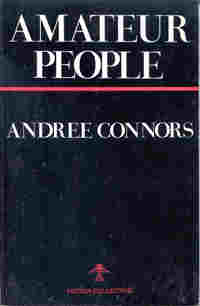 Gutting the interior of an old International bakery van, Connors used strips of old redwood, lushly colored fabrics, and treasured trinkets from around the world to create a unique mobile residence that she inhabited for several years. To those mystified by her desire to live in the renovated van and roam the region, Connors once wrote, “Lifestyle is only limited by lack of imagination. There are many wonderful ways to be in this world.”

Connors died in 2001 of breast cancer, but her colorful van is a lasting, vibrant testimonial to life on the back roads of Mendocino County.

Before her death, Connors donated the van to the Mendocino County Museum, which is now using it as a centerpiece for a new exhibit paying homage to a movement that, while faded, remains tightly woven into the county’s socioeconomic fabric.

Museum curator Elaine Hamby describes the “Wonderful Ways to Be” exhibit as an exploration of the youthful idealism, creativity and activism surrounding a cultural phenomenon dating to 1969, when the first large influx of so-called new settlers arrived in Mendocino County.

Andrée Connors has written a novel so precise and powerful, as an image, that it will help us create a whole new anthropological view of ourselves. Amateur People is one of those terrifying mirrors made of bone; a novel with no one home but the reader and no choice for the reader but to admit it. We are the Amateur People, and while for most writers that would be our plight, for Connors it’s a solution — she’s that tough; and her novel goes a long ways toward making it possible for us to be that tough too. This is a book capable of making us change the ways we like to think of ourselves.