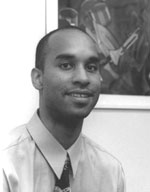 Ricardo Cortez Cruz was born in Decatur, Illinois. During high school and college he worked as a sports intern and newsroom clerk for the Decatur Herald and Review and as a sports clerk/writer for the Bloomington Pantagraph. He holds a master’s degree in writing from Illinois State University, where he was awarded the 1987–1988 Robert Brome Creative Writing Award, and is currently completing his doctorate there. His fiction has been published in Black Ice magazine, and a story is forthcoming in Fiction International. His hobbies include stereo mixing and basketball. He is currently living large in Bloomington, Illinois.

Five Days of Bleeding is urban folktale told in the syncopated rhythms of black-vaudeville patter. Cruz has got his hip-hop chops; but, behind him, you can hear Charlie Mingus plucking on an upright bass. This is a novel to be sung aloud. Pop your fingers, people. 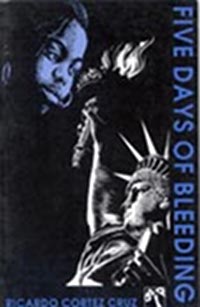 Five Days of Bleeding is the black experience in sound, a fight to dance and celebrate cultural roots, and the struggle of a dark homeless woman, Zu-Zu Girl, to have voice in White America.

Taunted by the violent character “Chops,” Zu-Zu sings to keep her spirit alive in New York City’s Central Park. Zu-Zu and the novel’s narrator have a relationship which is transformed into a stormy, dreamlike urban affair. Their oppressive situation is depicted through multiple collages of sound and image, a funky mix of original and sampled cuts, both literary and musical.

The social chaos around them is remixed in a text consisting of street beats, classic breaks, and fresh-cool cadences. Bleeding proves that the loudest noises of moral panic can be gunshots, to be sure, but they can also be the very human sound of the music of hope and despair.

Ricardo Cortez Cruz maneuvers through the dark side of life, droppin’ pop references galore that stream into the reader’s consciousness, creating an ill landscape of surreal horror that’s wicked (and amazingly humorous) flipside to our own reality. Beneath the hyperreal texture of each outlandish scenario, Five Days of Bleeding resonates with an urgency rarely found anywhere nowadays, except for Hip-Hop.

If Grandmaster Flash, Jimi Hendrix, and Jacob Lawrence were to write a novel, you’d have a piece very similar to Ricardo Cortez Cruz’s.

Cruz is a kind of literary Michael Jordan whose verbal “moves” combine power, speed, and grace, and whose narrative skills include being able to start a scene one way and then unexpectedly change directions.

Straight Outta Compton is a linguistic breakdance, a colloquial jitterbug, a slangy flashdance, full of risks that pay off with harsh delight. It’s surreal at times, a nightmare in broad daylight with a lot of possessed and dispossessed characters, characters who talk out of two sides of their heads. These characters talk jive, they lust and scream, laugh and shout; most of all they stay in motion, living hard and fast in the moment, moment after moment. 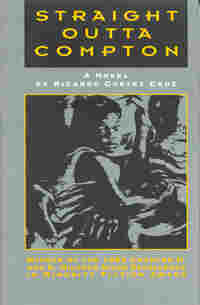 Straight Outta Compton is about living large, living in the fast lane. It raps to its readers about being black, being born and raised in the L.A. ghetto, being so-called “Niggaz 4-Life,” being sweet on black life (for those in it, the beat goes on). It focuses on the lives of two black men, Rooster and Clive-nem, who grow up together in Compton. Clive-nem and Rooster split up, fall into rival gangs — the Bloods and the Crips — and begin to hate each other. Clive has other problems besides Rooster — namely, Compton. He thinks that he’s made a girl pregnant. He’s involved with gangs. Straight Outta Compton samples from all aspects of black life in its search to have its characters find what rapper Heavy D. would call a “Peaceful Journey.” It wasn’t just written; it was mixed by a DJ, and the result is hyped!

Ricardo Cortez Cruz’s novel Straight Outta Compton is a linguistic breakdance, a colloquial jitterbug, a slangy flashdance, full of risks that pay off with harsh delight. It’s surreal at times, a nightmare in broad daylight with a lot of possessed and dispossessed characters, characters who talk out of two sides of their heads. These characters talk jive, they lust and scream, laugh and shout; most of all they stay in motion, living hard and fast in the moment, moment after moment. They are whirled together in wonderment and anger. There’s courage here. Boldness. Life lived at the speed of television light and noise. And there’s rock hard authority. The confident, angry voice of the author lends them their anger. And who can say that this anger is unjustified in the streets of South Central L.A., or in this novel, that is not itself a kind of passionate expression of the quest for love?

Clarence Major, author of My Amputations, Winner of the 1986 Western States Book Award

As we move into the nineties, rap music’s slice-and-dice (and then bring-the-noize) approach has been this country’s most effective and original strategy for providing outsiders with a sense of the urgency, anger, and sheer exhilaration produced by the collisions of sounds, sights, and people in our urban jungles. Now in Straight Outta Compton, Ricardo Cruz has succeeded in writing the first major rap novel. It’s a brutal, authentic, and often startling book brimming over with the surrealism and black humor, exotic lyricism, and struttin’ intensity of our ghetto’s mean street scenes.