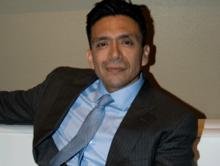 Originally from Chicago, novelist Tony Diaz is the author of FC2 novel The Aztec Love God, which Ishmael Reed selected as the 1998 Nilon Award for Excellence in Minority Fiction. Reed called Diaz “relentlessly brilliant.” Diaz has also edited Latino Heretics, an FC2 collection, and is also included in major anthologies such as Hecho en Tejas: An Anthology of Texas Mexican Writers edited by Dagoberto Gilb, and Literary Houston edited by David Theis. His essays have also appeared in the Los Angeles Times and the Houston Chronicle. He has just completed his second novel, The Children of the Locust Tree, which is in the hands of his agent.

Diaz moved to Houston to pursue a Master of Fine Arts degree in Creative Writing from the University of Houston’s Creative Writing Program. He became only the third Latino to complete an MFA from that program. While in graduate school, he began conducting workshops and seminars for different community organizations such as the then–Chicano Family Center and Talento Bilingue de Houston. That work inspired him to remain in Houston after completing his studies. He went on to create Nuestra Palabra: Latino Writers Having Their Say, which just celebrated its thirteenth Anniversary. Nuestra Palabra promotes Latino literature and literacy. This consists of workshops, readings, and book fairs. He is also the host of the Nuestra Palabra Radio Show on 90.1 FM, KPFT.

He is currently a Professor of English at Houston Community College, where he designed the course Introduction to Mexican American Literature.

It really does take a hard long look at what it means to be an American, what it means to be an artist, how tough and how smart you have to be to survive in this day and age. It will challenge and change what you think of as art, literature, and identity. This is what Diaz does not only with his writing but with Nuestra Palabra: Latino Writers Having Their Say. 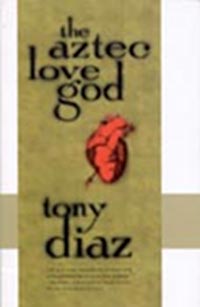 The Aztec Love God is a dark comedy about Tiofilio Duarte’s climb to obscurity. Originally, young Tio wanted to perfect the comic role of the Aztec Love God, his ideal persona. Along the way, he meets Jester, an older, Caucasian comedian who makes Tio an offer he’d like to refuse: Jester offers Tio an opportunity to join his act. The only condition is that he, Tio has to perform Latino stereotypes. Tio has to decide if he is going to take the blank check for easy thoughts or develop The Aztec Love God on his own.

The Aztec Love God is a vato but not too loco.

Diaz, who won the Nilon Award for Excellence in Minority Fiction, is an ethnic writer trying to work against stereotypes. His coming-of-age tale is about Tiofilio Duarte, a Mexican American high school student who dreams of becoming a stand-up comedian. Written in the short, staccato bursts of a comic’s monolog, the novel examines the multiple personalities adopted by Tio as he tries to fit into the different worlds comprising his life. He is Junior or Tio at home, Antonio Marquez in his prestigious Catholic school, Lorenzo Casanova on his forged ID, and Juan Valdez at the comedy club where he sells out, joking about the worst Hispanic stereotypes as part of his successful act. Portraying a world in which Hispanics are bombarded by white televised images, where the Duartes’ home is the former set for Leave It To Beaver, this wildly funny look at the world through Tio’s eyes heralds a new talent.

I had heard about Tony Diaz and The Aztec Love God through the writing group Nuestra Palabra: Latino Writers Having Their Say, which he is the founder of in Houston, Texas. So I went to check it out, and I also read the book. I think they are both alike and linked. The Aztec Love God is cutting edge, and is changing what is expected of Latino Literature. The book is hilarious, but also very wild, and also experimental. On one level, you will laugh out loud at some of the things in the book, the comedy, the situations. The main character Tiofilio Duarte is very funny. It is so funny, and so crazy at times with its form and style that you might miss how deep the book is. It really does take a hard long look at what it means to be an American, what it means to be an artist, how tough and how smart you have to be to survive in this day and age. It will challenge and change what you think of as art, literature, and identity. This is what Diaz does not only with his writing but with Nuestra Palabra: Latino Writers Having Their Say.

The Aztec Love God is an experimental text. It is one that does not invest in the style of the Chicanos of the 1970s, nor of the high brows of New York. It is a book about a young Latino coming of age even when challenged to go down the easy road. Durante, the comic, encounters Lester, a would-be manager, who only sees Durante in terms of a stereotype. Durante has to decide which road he should travel, and then, look toward a past that has never really been explained to him. To read the text, one most getting ready to laugh, then think. It is not an airport novel, nor a romance. It is a dose of reality, con un poco humor.