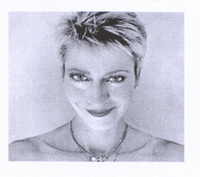 Debra Di Blasi is the recipient of many writing awards, including the James C. McCormick Fellowship in Fiction from the Christopher Isherwood Foundation, the Thorpe Menn Book Award, and the Eyster Prize in Fiction. She was a finalist in the Heekin Foundation’s Novel-in-Progress Fellowship and in the first Panliterary Awards sponsored by Drunken Boat literary journal. Her mixed media fiction Sparrows received a Pushcart nomination, and her essay “What Three Cheers Everywhere Provides,” an Editor’s Choice nomination for Best American Essays.

Her books include the novellas Drought and Say What You Like (New Directions) and the story collection Prayers of an Accidental Nature (Coffee House Press). Her mixed media novella, Ugly Town, was published 2007 in conjunction with a hiphop/rap competition and CD production. A spoken word/rap album and book, based on her poem cycle Twin, was released in late 2007. Other writing includes short stories, essays, art reviews and articles published in a variety of national and regional publications including The Iowa Review, Notre Dame Review, Poetry Midwest, First Intensity, New Letters, Chelsea, The New Art Examiner, and many others. Her fiction has been anthologized and adapted to film, radio, theatre, and audio CD in the U.S. and abroad. Museums have featured her collaborations with visual and audio artists, and her drawings, paintings and videos have been exhibited in galleries.

Screenwriting credits include The Walking Wounded, finalist in the 1996 Austin Screenwriters Competition, and Drought, for which she won the 1999 Cinovation Screenwriting Award. The short film Drought was directed by Lisa Moncure and went on to win a host of national and international awards, including Best Drama and Best Director (Toronto), Best Medium Film (Lisbon), Kodak Visions Award for Cinematography (Avignon, France), and Grand Prize and Kansas City Filmmakers Jubilee. Drought was only one of six US films selected for the Universe Elle section at the 2000 Cannes International Film Festival.

Debra is president of Jaded Ibis Productions, Inc., a transmedia corporation™ producing most notably The Jirí Chronicles, a mélange of over 400 fictive audio interviews and music, videos, print, web and visual art works. She was the Founding Chair of Crosscut: Women in Film, former art columnist for The Pitch, and taught innovative writing forms at Kansas City Art Institute for over five years.


The Jirí Chronicles & Other Fictions

The Jirí Chronicles & Other Fictions

This collection of conceptual fictions enacts the misalliances of lovers, coworkers, families, and friends, following out the unlikely conjunctions of postmodern America to their often preposterous ends. At the work’s comic center is an invention that transgresses the boundaries of fiction and fraud. Just who is Jirí Cêch? A businessman, vampire, and artist from Czechoslovakia? A website? A hoax? An American con artist whose racism and sexism, although obnoxious, only heighten his allure? Or is he Debra Di Blasi herself? Obsessed with everything as enigmatic as himself, whether platypuses or Emily Dickinson, Jirí seems determined to become an obsession for us as well.

In her third work of fiction, Debra Di Blasi explores the process of writing, not merely as an arrangement of words, but as the creation of pages, of signifying colors and forms in two-dimensional space. The Jirí Chronicles & Other Fictions is writing for the eyes, with illustrations and digital images defining this work as a response to our collective lust for visual information. Di Blasi’s ability to generate tension results from her integration of these pictorial codes with exquisitely designed sentences:

The poet bored of living dead, so loving the living dead – Emily with her clever dash of pause and breath, little here-to-there line demarcating the fat-swarming world here she inhabited there on her page in her mind, that line a slit through which she’d slip, like a finger between labia, and all the wetness of creation a swooning banquet of word-interlaced silence.

These mixed-media fictions are as fun as they are intellectually provocative. The Jirí Chronicles & Other Fictions is a masterful work by one of America’s creators of a new literary medium.

Both Di Blasi’s style and her objective distance and comprehension of her chosen subject mark her as a very psychologically driven, very talented writer.

Di Blasi is a bold talent and succeeds in a teasingly abrupt style.

Agitated, angry, inventive, iconoclastic, both literally and figuratively graphic, the real Jirí Cêch would both revere and rape Emily Dickinson, then bottle all the blue flies she ever imagined and make a balm to annoint the body of his beloved. Or at least the object of his desire.

Here is a series of tales, in varying keys, of intoxication and revenge, intoxication with whatever seduces, revenge for being seduced. An oblique memoir of family, an investigation of a mother’s misplaced life, flirtation with self-advertisement in the manner of supermarket tabloids, and above all the Chronicles of Jirí Cêch, seducer supreme, rogue chauvinist, lover and enemy. Beware, reader, you’re in for a sumptuous, hypertextual, hypercharged ride. Hyperion himself would smile.

Debra Di Blasi’s The Jirí Chronicles & Other Fictions is chaotic, brilliant and, like Jirí Cêch himself, possibly quite mad. With frenetic energy, Di Blasi mixes personal narrative with ad copy, traditional fiction with newspaper clippings, email messages, reportage, collage, and scholarship. The resulting concoction is consistently surprising, challenging, invigorating, and, most surprisingly of all, often deeply moving. Di Blasi has a mind unlike anyone else writing fiction today, and this is her finest work yet.

Kevin Prufer, editor of Pleiades: A Journal of New Writing

In Di Blasi’s visual rhapsody, time passing is us fucking, killing, and betraying each other; time stalled is our obsessive concern with the head of the spear. All our furies-fathers, the way roots rot, the puzzle of cross words, fathers-dance on the head of a pin, till we can’t help but laugh. Rage, cradled in Di Blasi’s brilliant hands, grows gorgeous. Mothers and trees from photos fade, and we enjoy an exquisite lack of orgasm, sobriety … and bears.