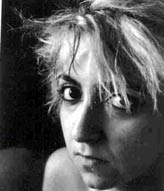 Eurydice (Eurudice) was born on Lesbos and brought up in Alexandria and Athens. She has published two books of poetry, one in Greek, and has written two novellas, scree and Amfi-trite. She holds a BA in Creative Writing and Fine Arts from Bard College, a Greek University degree in Minoan Archaeology, and an MA in Creative Writing from the University of Colorado at Boulder, and is a PhD student in comparative literature at Brown University, currently on leave.

Eurydice says of herself: “At the age of two, the author began crossing out sections in her storybooks that displeased her, rephrasing them more imaginatively. By the age of eight, she had rewritten the books in her father’s library, including Homer, Shakespheare, and Beckett. She ran off to Hollywood at fourteen, planning to live as a guest, and was shocked to discover she had to learn English. En route to Japan, she is now exploring India, the ultimate frontier.”

Comical, ribald, passionate, visceral, maniac, and wise. Almost any page of F/32 redeems us from the anemic writing and banalities we have endured in the past decade of the bloodless fiction. 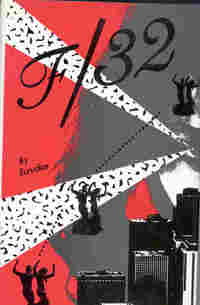 Beauty invited the Beast for a stroll on a crystal path strewn with hollow silver hearts that were being stirred up by stiff gusts of wind like clouds of dust: and so everything began.

And so begins F/32, Eurydice’s award-winning first novel about Ela (a pseudonym meaning orgasm). The sight of Ela stops all hearts. Ela is an expert in love. No matter how many people love her, she daily inspires more. She spends half her life avoiding the people who love her, and the other half making them love her. She is mind blowing.

A mock-quest for self-understanding and unification, F/32 lures the reader into a landscape of sexual alienation, continually interrupted by gags, dreams, mirror reflections, flashbacks, and scenes from Manhattan street life. It is a wild, eccentric, Rabelaisian romp through most forms of amorous excess. But it is also a troubling tale orbiting around a public sexual assault on the streets of Manhattan. Between the poles of desire and butchery the novel and Ela sail, the awed reader going along for one of the most dazzling rides in recent American fiction.

This is a highly original narrative, a parable of sorts, disturbing and funny at the same time.

F/32 is one of the most daring American novels I have read in years. It is comical, ribald, passionate, visceral, maniac, and wise. Almost any page of F/32 redeems us from the anemic writing and banalities we have endured in the past decade of the bloodless fiction. Let’s hope F/32 sets the creative tone for the ninties.