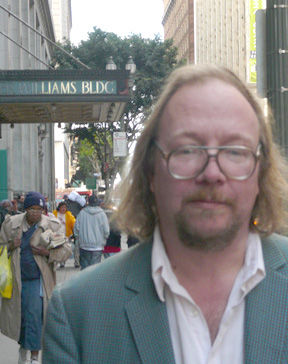 Larry Fondation is the author of five books of fiction, all set primarily in the Los Angeles inner city. Three of his books are illustrated by London-based artist Kate Ruth. He has written for publications as diverse as Flaunt Magazine, The Los Angeles Times, Fiction International, and The Harvard Business Review. He is a recipient of a Christopher Isherwood Fiction Fellowship. In French translation, his work was nominated for SNCF’s 2013 Prix du Polar. Larry Fondation’s first novel, Angry Nights, won the 1994 FC2 National Fiction Competition.

Larry Fondation hears original worlds at launderettes and the rave of demons at the park foundations. The nights are angry and so are the shadows that haunt the memories of broken promises in this exceptional novel.… Angry Nights could cure the cruelties of silence. 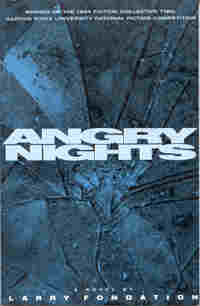 Angry Nights is a novel about buried life in the darkest corner of the darkest alley in Los Angeles. And yet, for all its sense of doom, this illuminating novel is also about the force of life interrupting through the rubble of the inner city. Manic, defeated and yet curiously determined. Angry Nights is a thoughtful picture of our postmodern zeitgeist, where the system interfaces flesh and concrete.

Angry Nights is about a world where betrayal can become a part of the structure of everyday experience. Poz and Army, best of friends, jointly imagine a murder which will make Poz $5,000. By the end of their conversation, it occurs to Poz that he now must kill Army because “I told you too much.” One character hands the keys to her dead boyfriend’s car to a stranger in a dark movie theater. Another shoots rats in the dark to prepare for “Zen murder” in the urban jungle.

At a time when the plight of urban America increasingly makes for grim headlines and when some have even cast the very future of our cities in doubt, Angry Nights provides a gripping account of life in the American inner city. In prose that is terse and bristling with tension, Angry Nights reveals a highly charged world that many of us fear, or worse, prefer to deny. Like novels such as A Clockwork Orange and Last Exit to Brooklyn, Angry Nights points to a reality we can only ignore at our peril.

Angry Nights is the most compelling debut of fiction I’ve read since Denis Johnson’s Angels. Fondation’s characters, stripped by poverty of all pretense, exist in an inner city world where hope is constricted and joy desperate and limited. For all that, these characters persevere, continue groping for transcendence, looking for — and finding — reasons to go on. Neither sensationalistic nor unremittingly bleak, Angry Nights is engrossing and entertaining at the same time it is thoroughly horrifying. It should be read not only by those interested in the future of fiction — but by anyone interested in the future of this world.

Larry Fondation hears original worlds at launderettes and the rave of demons at the park foundations. The nights are angry and so are the shadows that haunt the memories of broken promises in this exceptional novel. The interior stories uncover bullet holes, bitten nails, open sores and other common miseries with the ironic manner of a barefoot game show host. The characters are wise, and some of them are measured with a brush of violence in curt conversations. Angry Nights could cure the cruelties of silence.

Gerald Vizenor, author of Griever: an American Monkey King in China and The Heirs of Columbus