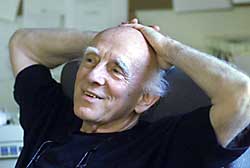 James Baker Hall, a highly respected teacher of writing at the University of Kentucky, is Kentucky’s new ambassador of poetry. In a ceremony held April 24, Kentucky Writers’ Day, Hall said he was “humbled” by two standing ovations in Frankfort’s Capitol Rotunda. He added that he is “ready, willing and delighted” to be in a position to spread his passion for writing to people across Kentucky. Governor Paul Patton introduced Hall at the ceremony, saying that he “will bring to Kentucky writers the recognition they deserve.”

As the new poet laureate, Hall received a two-year appointment with the mandate to promote and encourage participation in the literary arts in Kentucky. He feels there’s been a great omission in arts education, in that students are taught about works of art but never get to talk to an artist. So Hall plans to push for a greater presence of artists in schools.

He also wants to bring to students a greater awareness of Kentucky’s literary heritage. “I’ve become increasingly intrigued by the state of letters in Kentucky,” says Hall. “There are a number of writers in the state with national and international reputations, dedicated authors whose work has been formed, at least in part, from living here. This is a story I’m looking forward to telling.”

Hall sees an interconnectedness in his generation of writers from UK, many of whom have been friends for over forty years — Wendell Berry, Ed McClanahan, Gurney Norman and Bobbie Ann Mason (who is, as of this fall, UK’s first writer-in-residence). All but Mason went from UK to Stanford University and were awarded a Wallace Stegner Fellowship for emerging writers.

“Four of us in a row were out there on Stegner fellowships,” Hall says. “First Wendell in 1959, then Gurney and me, then Ed. There never had been four Stegners coming from the same school. Not from Harvard or Yale or any of those big schools,” he says with a characteristic grin.

Being the poet laureate of Kentucky, Hall says, is more about the pride of calling than the pride of place. “It’s an opportunity to tell a story I strongly believe in. I want to help people understand that the art of poetry isn’t limited to any state borders. I would hope that reading widely in literature would relieve people of the burden of provincialism.”

Hall is pleased that the position of poet laureate is being taken seriously at the level of state government. The poet laureate does not receive a salary but is given $5,000 for expenses, primarily for travel to speak and meet with groups around the state.

“I think Jim’s appointment is really quite wonderful,” McClanahan says, “and from day one he’s made himself a spokesman for Kentucky writing. It’s also terrific that he’s finally getting the recognition he’s deserved all along.”

“Jim’s presence in the classroom — how he understands writing, how he gives to every student, his high expectations — all of this has changed my life. Not just my writing life, but my personal life as well,” says Rebecca Howell, who has taken classes from Hall since 1996. “Jim’s teaching practice is also a practice of compassion. I think you would be hard-pressed to find a former student of his who was not quick to say how much Jim genuinely cares about his students’ well-being.”

Hall, who has received a National Endowment for the Arts Fellowship in poetry, has taught creative writing at the University of Kentucky since 1973. He has published five volumes of poetry, two novels, and four collections of photography. The New Yorker, The Paris Review, The American Poetry Review, Poetry, The Hudson Review, and The Kenyon Review are among the many magazines to have published his work.

Hall’s latest book of photographs, A Spring-Fed Pond, is available from Crystal Communications in Lexington. The book features his photos of Kentucky writers, including his wife Mary Ann Taylor Hall, a novelist and short story writer.

Music for a Broken Piano

The writing is wonderful, the characters compelling.

Music for a Broken Piano 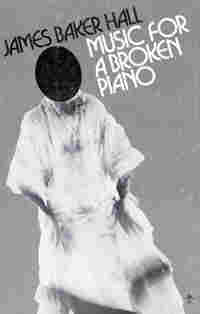 … a trip to the dark side of the liberal imagination. It is a book about the longing for community, about the real world’s refusal to be tempted by idealizations, about the destructiveness of certain forms of fantasy. The writing is wonderful, the characters compelling.