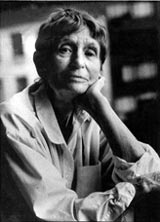 In the course of her long career, Marianne Hauser published numerous works of fiction, including Prince Ishmael, which was nominated for a Pulitzer Prize and selected by The New York Times as one of the year’s outstanding books. Her other books include Monique, Shadow Play in India, Dark Dominion, The Choir Invisible, A Lesson in Music, Me & My Mom, The Memoirs of the Late Mr. Ashley, and The Talking Room, published by Fiction Collective. She died in June, 2006, at the age of ninety-five.

Hauser has a sharp eye and sure words. 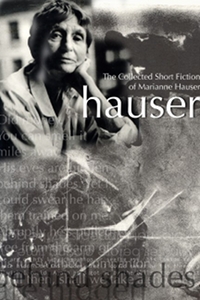 Marianne Hauser’s short fiction is a literary documentary of exile, the other-worldly travelogue of an imagination permanently displaced. These accounts of expatriates and lost children situate us in foreign realms, between the titillating intimacies of strangers and looming brutalities we can never quite see. A narrator recalls Strasbourg during WWI, the entangled thoughts of her childhood in a territory forced to change flags too many times: My political universe was confused, reflecting that confusion of tongues in our home where French might alternate with German or Alsatian, a patois harsh and Alemannic through which French idioms flitted like clever birds. It’s as though even parents and bodies and dreams had turned out to be alien impositions. In retrospect the narrator’s naive literalisms, her half-literate attunement to puns and double entendres, still infect each recollection, creating a linguistic haze in which her past both vanishes and returns.

In Hauser’s fiction, expatriation is not a historical accident but a condition as essential to humans as breathing or speech. A young boy’s suicide in “Heartlands Beat” or a child’s vision of her piano teacher’s corpse invoke the permanent dislocations that adulthood can never overcome. Absorbed in a dubious adventure that tasted of the iniquitous and forbidden, I would stare at the vibrating lump of flesh, quite unlike a face and yet more inexorably human than any I had ever known. It is as though birth were, for Hauser, the great forced migration, an incomprehensible banishment from some homeland every child can remember.

Her characters gaze in bewilderment at the crude and violent landscape that, through preposterous twistings, they have come to occupy, wondering how they could have ended so incongruously, unable to imagine any dwelling but here.

Beautiful fabrications from the writer about whom Anais Nin remarked, “She deftly weaves the strange, the unknown, the unfamiliar, the perverse, into a fabric of human fallibilities that draws drama and farce close to us.”

She succeeds in fusing the fantastic and the ordinary.

Shootout with Father is a richly textured novel built around the love-hate conflict between a father and his grown son. The story is told by the son, James, a sculptor of small objets d’art, miniature versions of the armor his father has spent a lifetime collecting. The father’s ambiguities become the son’s obsession and he finds himself digging deeper and deeper into his father’s past in an effort to understand the man before he was a father. He discovers a student filled with romantic dreams and high hopes, a latent homosexual who, after a bizarre episode of dashed expectations, rejects his nature and builds a fortress of denial. These revelations come to light in a suspenseful, many-layered plot that is delivered with a remarkable mixture of sensitivity and biting wit. This work is vintage Hauser, an Oedipal companion piece to The Talking Room, recounting the astonishingly suicidal lengths to which the child in everyone will go to be acknowledged by his or her creator.

An artist desperate for approval from his wealthy, sadistic father narrates nonagenarian Marianne Hauser’s (The Talking Room, etc.) spare but engrossing novella, Shootout with Father. James, a sculptor, tries to make sense of the daunting man who has brought him so much misery and frustration. Through a series of recollections and forbidden letters, a portrait of James’s father emerges: an avid collector of priceless armor, a brilliant businessman who abused and neglected his wife and son. But most illuminating is the discovery of his father’s long-ago infatuation with an older male mentor and the heartbreak he experienced as a result. Hauser’s insight and sharp wit make for a captivating read.

The Talking Room reflects an apocalyptic vision of the late 20th century, seen through the eyes of a pregnant thirteen-year-old who may not be a test tube baby. The Lesbian relationshop between the mother J — wild, lost, beautiful — and competent Aunt V, a business woman, reveals itself to the reader as “the talking room” becomes the sounding board for the endless fights, endless reconciliations. V’s desperate search for the beloved J through the nights of waterfront bars is lightened by wildly comic excursions reminiscent of our great American humorists. With wit, poetic clarity and compassion, Marianne Hauser explores the paradoxes of our age — need for love yet flight from love, search for self yet self-destruction — a dilema shared alike by today’s heterosexual and homosexual world. The author’s multifaceted view defies dogma or simplification as her characters draw us into their turbulent and deeply human drama.

… the most insanely perfect novel I have experienced in … 20 years. Vladimir Nabokov, roll over.