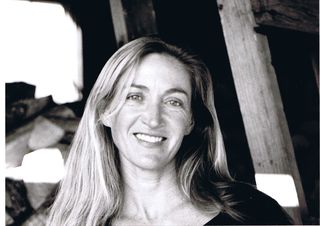 Noy Holland is the author of Swim for the Little One First (FC2), What Begins with Bird (FC2), The Spectacle of the Body (Knopf), and, most recently, Bird (Counterpoint). She has published work in Conjunctions, The Quarterly, The Believer, NOON, New York Tyrant, Fairy Tale Review, Western Humanities Review, and Post Road, among others. She was a recipient of a Massachusetts Cultural Council award for artistic merit and a National Endowment for the Arts Fellowship. She has taught for many years in the MFA Program for Poets and Writers at the University of Massachusetts, as well as at Phillips Andover and the University of Florida.

Swim for the Little One First

What Begins With Bird

Ms. Holland habitually challenges the usual limits of language, but the effects of her exuberance are never precious and often turn suddenly into beauty; her characters portray themselves in a discourse that is startling but genuine, the secret syntax of real lives.

Swim for the Little One First 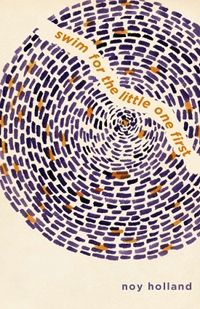 Swim for the Little One First is a dazzling new collection of twelve short fictions by the acclaimed fiction writer and prose stylist Noy Holland. The stories gathered in Swim for the Little One First vary in setting (Ecuador, Montana, Florida, the Berkshires, North Dakota, New Mexico, and California) and style (from the plainspoken to the fustian).

In “Milk River” a young girl whose mother has committed suicide and whose brother has gone off to war is left to tend to her ailing father; in “Today is an Early Out” a family finds itself caught in a mudslide in the Sierra Nevada; in “Merengue” a young couple takes up residence in a HUD hotel in Miami Beach, among the elderly living out their last days. In the title story a woman with young children addresses her father, who has come to visit, in the obdurate language of remorse. In “Pemmican” the author takes a comic approach to the telling of an absurd story about escaped pet mice surviving winter in a car. In these and seven other stories, Noy Holland, an author praised by writers and critics ranging from William H. Gass to Michiko Kakutani, presents readers with what Gass has described as “beautifully lyrical but bitter prose and … an ardent grimness of eye that is both unsettling and intensely satisfying.

In wonderfully cadenced and concise prose, Swim for the Little One First cracks the chests of struggling lives to show the hearts beating within. These stories of difficulty are not sentimental, nor are they artificially cold: they are wonderfully, nakedly human.

The syncopated rhythms of Noy Holland’s rapturous prose jolt the heart and spark the senses. If you can bear to explore the limits of your own compassion, open this book to “Blood Country” or “Milk River.” You cannot prepare yourself: you can only surrender.

Melanie Rae Thon, author of The Voice of the River and In This Light

A ravishing associative logic of recurrent objects and sounds distinguishes Noy Holland’s original stories; the bird in the book’s title is the writer, herself, surely a poet, singing of “The slickened births and murders, ours, the fierce wide blowing day.” Old wisdom newly and grandly delivered.

What Begins With Bird 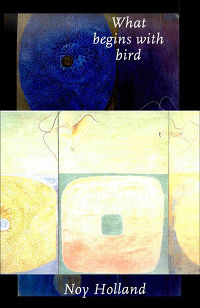 What Begins with Bird, by Noy Holland, is both an investigation of family relationships and a sophisticated study of language and rhythm. Holland creates an exhilarating tension between the satisfactions of meaning and the attenuated beauty of lyric, making her fiction felt as deeply as it is understood. An unstable sister whose misconceived pregnancy replays the endless nightmare of childhood siblings and a wrecked marriage occasioning the misery of a horse: these are the frozen events around which Holland’s words congeal. The poetry of her images, powerful but immediately absorbed, can bring consciousness to a standstill: By then I’ve reached her: Sister spluttering, spitting out the plug of snow. Her mouth is bleeding. Her face is the grotesque of a face, a soul in flames, some rung of hell, and she is sobbing, spit puddling under her tongue. The Faulknerian echoes of Holland’s prose invoke a dreamscape, a panorama enclosing barns and men and guns and Mother, as she trudges the cold hills in her nightgown. This writing is exquisite, a gorgeousness as unforgettable as a stabbing pain or the after-image of a howl in the pitch of night.

Holland’s scrupulousness and respect for the language keep this text alive and kicking. What Begins with Bird is a book to be read slowly and thoughtfully, shared, passed along.

From broken phrase to sentence, from sentence to paragraph, from paragraph to scene and scene to story, Noy Holland’s aims are ambitious, her tone right, her diction masterful, and she spells her stories out in bites of beautifully lyrical but bitter prose and with an ardent grimness of eye that is both unsettling and intensely satisfying; however the reader must weigh every phrase and go forward warily because images await like traps set in a forest. What Begins With Bird is a remarkable achievement.