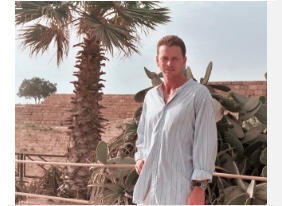 Bayard Johnson studied philosophy and writing at the University of Puget Sound. A licensed Master Mariner, he worked as a fisherman in Alaska and as captain of an oil spill recovery ship in California while embarking on his writing career. His novel Damned Right was published by Fiction Collective 2 in 1994, and Johnson toured the U.S. and Europe upon the book’s release. He made a second European tour with the book’s publication in German translation, under the title Speed Taxi, in 1998. Johnson has written over 100 short stories, which have been published in numerous journals and anthologies including Fiction International, Exquisite Corpse, Theater der Zeit (Berlin), and Alt-X. As a founding member of the band Mother Nature’s Army, Johnson has written numerous songs which have aired on radio stations across the U.S. and Europe, and has toured the West Coast, the American Midwest, and Europe. He also wrote and produced rock ‘n’ roll albums with Russell Means and the late Dr. Timothy Leary. Johnson has made two trips to Africa to work on feature films which he wrote, and has written movies based on the classic Tarzan character and on Kipling’s Jungle Book series. His first African movie, Damned River, shot in Zimbabwe, is among the Top 20 action movies of the 1980s in the Netflix database. Johnson has written and/or produced feature films which have been bought and produced by Warner Brothers, Disney, Sony Pictures, MGM/UA, and 20th Century Fox. With partner Bill Duke (director of Deep Cover and co-star of Predator), Johnson co-wrote and sold a TV series to HBO in 2008. With partner Russell Means, Johnson co-wrote the feature screenplay Wounded Knee 1973, the story of the 71-day shootout and subsequent 9-month federal trial, which resulted in complete exoneration of Russell and co-defendant Dennis Banks. Johnson and Means also collaborated on the award-winning short film Looks Twice, the first film based on a traditional Lakotah story and the first movie produced in association with the American Indian Movement. In 2012 Johnson and Means published the book If You’ve Forgotten the Names of the Clouds, You’ve Lost Your Way: An Introduction to American Indian Thought and Philosophy. Johnson is currently producing the independent feature film Man In a Cage, a movie about revolution and subversion, now in post-production.

You are gonna be propelled, rocketed, eye-balled down high-ways and fast-tracks of this low-writing spead-freak name of Bayard Johnson. Zoom! He’s a drive-by shooter! He’s a reckless rider swerving words under the influence of semantic juices Kerouac never dreamed of!

Damned Right is a visceral new incarnation of the American road novel that blasts full-throttle toward enlightenment. Its twentysomething protagonist practices the yoga of speed and motion toward a peculiarly American nirvana at 200 mph. The freeways beyond a mountain community in the Pacific Northwest promise a non-Euclidean geometry of right and wrong, and without fully understanding his mission he is compelled to head south. The bleak sprawl of Los Angeles lies ahead of him, as it lies ahead of us all. In the city of tomorrow he meets a succession of fossilized idealists imprisoned by their dreams. They draw him into a series of adventures and ordeals that reveal an apocalyptic vision of the future.

Warning! — When you hunker-down with this book Damned Right you better buckle-up seat belt, don crash helmet. You are gonna be propelled, rocketed, eye-balled down high-ways and fast-tracks of this low-writing spead-freak name of Bayard Johnson. Zoom! He’s a drive-by shooter! He’s a reckless rider swerving words under the influence of semantic juices Kerouac never dreamed of!

This story takes American realism into the dimension of postmodernity. Damned Right promises to become a classic, highly recommended to anyone interested in exploring the new dimension of the fiction of marginality.

Malidoma Patrice Some, author of Ritual: Power, Healing and Community