Stephen Graham Jones’s first novel, The Fast Red Road: A Plainsong (FC2, 2000), won the Independent Publishers Award for Multicultural Fiction. His second novel was All the Beautiful Sinners (Rugged Land, 2003). He was awarded a 2002 NEA Fellowship for The Bird Is Gone, and his fiction has appeared in numerous literary magazines, including Open City, Meridian, Pleiades, Cutbank, and Alaska Quarterly Review. He’s Blackfeet and a Professor at the University of Colorado Boulder.

Jones has exploded the conventional rhythms of novelistic narrative. 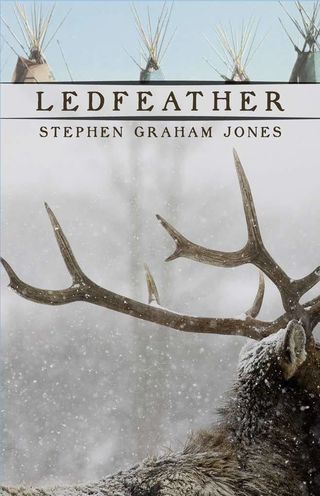 After burning up all the blacktop New Mexico had to offer with The Fast Red Road and rewriting the Great Plains into a place both more and less Indian than they already were with The Bird is Gone, Stephen Graham Jones has now brought the story up to Montana. And it’s leaner than it’s ever been. Not because it’s about the Blackfeet, who have been schooled by the government on how to starve, but because this time the story is just about one Indian boy, standing in the middle of the road at night, trying so hard to change history. And these next moments, the headlights already throwing his shadow miles behind him, across all of America, these next moments are going to decide everything. Balanced on the knife edge of winter like the Blackfeet have always been, a single act can resonate for generations. This is Ledfeather. The story of Doby Saxon, standing in that road just outside Browning, his hands balled into fists, the reservation wheeling all around him like he’s what the last hundred years have been hurtling towards.

And maybe he is.

The Bird is Gone is the one of the most strikingly original novels I’ve read in a long, long time. And yet, extraordinarily, its originality never overwhelms its humanity. What a thrill it is to see the world through Stephen Jones’s sensibility.

The Bird is Gone — A Manifesto

Part murder mystery, part declaration of independence, The Bird is Gone: a Manifesto takes Native American writing where it has never gone before — into a future where the Dakotas are Indian Territory again. The Traditionals now cling to their microwaves, while the Progressives live on the grassland with the buffalo. Inside a bowling alley called Fool’s Hip, Special Agent Chassis Jones is questioning Nickel Eye about thirty-nine tourists who have gone missing. Everybody in the place is listening: Mary Boy, the Jesus tattoo on his arm still bleeding; Cat Stand, about to peel off her last undershirt; Back Iron, checking the run in his nylons, and LP Deal who, in spite of the AllSkin tournament under way and the swarm of anthropologists at the border, is writing it all down.

In The Bird is Gone, Stephen Graham Jones follows his brilliant first novel, The Fast Red Road, with another work of pure originality and quirky brilliance. No unintended clichés or stereotypes here. With Vizenor-like deftness and completely unexpected moves, Jones is taking Native American fiction in a new, necessary direction. We see a literature coming of age in these pages.

The Bird is Gone is the one of the most strikingly original novels I’ve read in a long, long time. And yet, extraordinarily, its originality never overwhelms its humanity. What a thrill it is to see the world through Stephen Jones’s sensibility. He is unquestionably one of our finest young writers.

For a while now I have felt that we Native American writers (and I most certainly include myself in the “we”) keep writing about the same damn things. Stephen Jones writes with a whole new aesthetic and moral sense. He doesn’t sound like any of the rest of us, and I love that.

This is by far the most exciting novel I’ve read in a long time. The excitement comes from the author’s skill with language, his fearlessness of story, and his multiplicity of attacks. The writing is hallucinogenic, varied, fascinating. While reading the novel, big names in writing came to mind: Pynchon, David Foster Wallace, even Faulkner. Having said that, though, Jones has his own style and aesthetic. He is not only bringing new subject matter to postmodern writing, but he’s also writing in new ways.

All natural and narrative laws are suspended in the hallucinatory whirl of Jones’s cuttingly funny and fantastic third novel … Caustically surreal in the manner of Hunter Thompson, even William Burroughs, Jones brilliantly and audaciously critiques the ironies inherent in our frontier mythologies, racial stereotypes, and inchoate longings for justice and a meaningful life.

My hat is off to Stephen Graham Jones, because he is the kind of author that makes the frustrated writer inside every book reviewer cringe with self-doubt.

The Fast Red Road — A Plainsong

The Fast Red Road — A Plainsong is a novel which plunders, in a gleeful, two-fisted fashion, the myth and pop-culture surrounding the American Indian. It is a story fueled on pot fumes and blues, borrowing and distorting the rigid conventions of the traditional western. Indians, cowboys, and outlaws are as interchangeable as their outfits; men strike poses from Gunsmoke, and horses are traded for Trans-Ams. Pidgin, the half-blood protagonist, inhabits a world of illusion — of aliens, ghosts, telekinesis, and water-pistol violence — where television offers redemption, and “the Indian always gets it up the ass.”

Having escaped the porn factories of Utah, Pidgin heads for Clovis, New Mexico, to bury his father, Cline. But the body is stolen at the funeral, and Pidgin must recover it. With the aid of car thief Charlie Ward, he criscrosses a wasted New Mexico, straying through bars, junkyards, and rodeos, evading the cops, and tearing through barriers “Dukestyle.” Charlie Ward slid his thin leather belt from his jeans and held it out the window, whipping the cutlass faster, faster, his dyed black hair unbraiding in the fifty mile per hour wind, and they never stopped for gas. Along the way, Pidgin escapes a giant coyote, survives a showdown with Custer, and encounters the remnants of the Goliard Tribe — a group of radicals to which Cline belonged.

Pidgin’s search allows him to reconcile the death of his father with five hundred years of colonial myth-making, and will eventually place him in a position to rewrite history. Jones tells his tale in lean, poetic prose. He paints a bleak, fever-burnt west — a land of strip-joints, strip-malls, and all-you-can-eat beef-fed-beef stalls, where the inhabitants speak a raw, disposable lingo. His vision is dark yet frighteningly recognizable. In the tradition of Gerald Vizenor’s Griever, The Fast Red Road — A Plainsong blazes a trail through the puppets and mirrors of myth, meeting the unexpected at every turn, and proving that the past — the texture of the road — can and must be changed.

Stephen Graham Jones is an original, visionary storier. The characters in this marvelous plainsong novel, waist high in witty, gritty, commotion, steal the reader away to the fantastic, wild edges of reality.

My hat is off to Stephen Graham Jones, because he is the kind of author that makes the frustrated writer inside every book reviewer cringe with self-doubt. The Fast Red Road — a Plainsong, Jones’s first novel, is the kind of debut that should cause critics and readers everywhere to stand up and take notice. It’s also the kind of debut that should drive wannabe writers to revise their copies of that crucial first manuscript over and over again, looking for the kind of power and majesty that they (by which I mean we) find in other newcomers.