Michael Martone was born in Fort Wayne, Indiana, and grew up there. He is the author of six other books of fiction including Alive And Dead In Indiana, Penseés: The Thoughts Of Dan Quayle, and Fort Wayne Is Seventh On Hitler’s List. He lives due south of his birthplace in Tuscaloosa, Alabama, where he edits Story County Books and teaches at the university.

Interview: A Prose Aesthetic of Progress (2004)

Michael Martone, the Indiana trickster, makes amusements of a serious, silliest, surrealist sort.… Martone electrifies distances across outer space; lost lusts; the lore of locomotives; the love, love, love of literature and all its lands.

The Moon over Wapakoneta 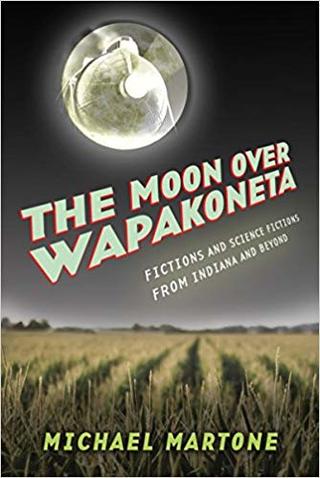 Lyric fictions by a master fabulist of America’s Midwest.

The Moon over Wapakoneta is vintage Michael Martone, the visionary oracle of the American Midwest with the gift for discovering the marvelous in the mundane. In these stories Martone shows us how traveling across time zones from Ohio to Indiana is a form of time travel, how a beer bottle can serve as a kind of telescope, how Amish might power their spaceships with windmills as they travel through space and time. These stories capture the paradox of feeling that one is in the heart of the country while at the same time in the middle of nowhere, of natives who find themselves strangers in their once familiar, but now strange, lands.

On display is a love of obsolete technologies, small-town whimsy, home movies of proms and birthday parties, steam engines and baseball games. If Italo Calvino lived in Indiana rather than Italy, these are the fictions he might have made.

In this volume of sly sci-fi stories, the strange is not found in the vistas of the future, but rather in the most familiar American technologies of the past — silos, watches, railroad trains — all of which are transformed by Martone’s astonishing eye into a landscape at once familiar and transcendent.

A playfully poetic exploration of place, proximity, relativity, and time. Refreshingly original and poignantly sentimental. A feast for the mind. Some of my favorite bits were “Four Yearbook Signatures” and “Girl Who Cried Sweetly.”

Chinelo Okparanta, author of Under the Udala Trees and Happiness, Like Water: Stories

In Moon over Wapakoneta, Michael Martone has turned his literary gaze to the moon and the stars and we’re all the luckier for it. Within these pages are Amish astronauts, atomic clocks, moon museums, and holographic movie stars. Once again, the Mark Twain of metafiction offers us a collection of fictions and beautiful universes — including our own.

Alexander Weinstein, author of Children of the New World: Stories

Oh, this world is wondrous and strange. Michael Martone, the Indiana trickster, makes amusements of a serious, silliest, surrealist sort. In this, his book of games, Martone electrifies distances across outer space; lost lusts; the lore of locomotives; the love, love, love of literature and all its lands. A journey far beyond.

One of our most gifted new realists gives beautiful, uncanny voice to the ordinary. Michael Martone’s work is original and important.

Four for a Quarter 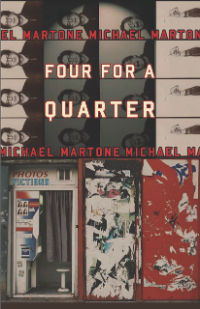 Four is the magic number in Michael Martone’s Four for a Quarter. In subject — four fifth Beatles, four tie knots, four retellings of the first Xerox, even the sex lives of the Fantastic Four — and in structure — the book is separated into four sections, with each section further divided into four chapterettes. Four for a Quarter returns again and again, obsessively, to its foundational number, making chaos comprehensible and mystery out of the most ordinary.

Forty years ago, when I was four times four and Michael Martone was four, we both had offices on the fourth floor of the fourth best university in the US. Even before I met Michael, I was forewarned of his forthright flare. These stories fortify my early impressions. We are fortunate to have them.

4×4: some of the things Four for a Quarter: Fictions do —

Reading Michael Martone’s Four for a Quarter is like flipping through radio stations in your car in the middle of the night in West Texas, a wash of wonderful elegiac fragments, memories, anecdotes, haunting bits and pieces of ordinary days, from Beatles’ backstories to the Eat Mor Chikin cow, from Santa Claus to baseball under the lights. You’ll have a hard time putting it down, and when you do, you’ll be eager to get back to it. A masterful performance.

Udders & Teats: Old Red, who got fed PBB fire retardant; Ada, full of hardware; Elsie, built like a steer; Bambi, who used to put her foot in the bucket about once a week (so I had to give the milk to the barn cats). Later we milked a goat, and we felt diminished.

He works his mischief well, facetiously and in dead earnest. 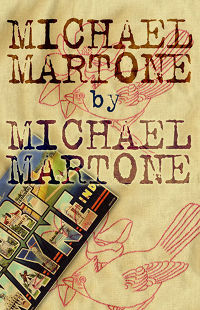 Michael Martone, by Michael Martone, continues the author’s giddy exploration of the parts of books nobody ever reads. Michael Martone is its own appendix, comprising fifty “contributors notes,” each of which identifies in exorbitant biographical detail the author of the other forty-nine. Full of fanciful anecdotes and preposterous reminiscences, Martone’s self-inventions include the multiple deaths of himself and all his family members, his Kafkaesque rebirth as a giant insect, and his stints as circus performer, assembly-line worker, photographer, and movie extra.

Expect no autobiographical consistency here. A note revealing Martone’s mother as the ghost-writer of all his books precedes the note beginning, “Michael Martone, an orphan …” We learn of Martone’s university career and sketchy formal education, his misguided caretaking of his teacher John Barth’s lawn, and his impersonation of a poor African republic in political science class, where Martone’s population is allowed to starve as his more fortunate fellow republics fight over development and natural resource trading-cards.

The author of Michael Martone, whose other names include Missy, Dolly, Peanut, Bug, Gigi-tone, Tony’s boy, Patty’s boy, Junior’s, Mickey, Monk, Mr. Martone, and “the contributor named in this note,” proves as Protean as fiction itself, continuously transforming the past with every new attribution but never identifying himself by name. It is this missing personage who, from first note to last, constitutes the unformed subject of Michael Martone.

This has to be one of 2005’s best, most interesting and hilarious collections of short stories, not only because of its bizarre, decontructionist format, but — for true lovers of literary fiction — its unique narrative as well.

It’s very different, and it’s clever, and it has a zesty swing to it that will make it a welcome acquisition.

You might expect a whole collection of contributor’s notes (well, okay, forty-two “Contributor’s Notes,” one “Vita,” one “Acknowledgement,” and one “About the Author”) to be a great experiment in autobiography, one that allows a writer forty-five different points of entry into his own life story — forty-five ways of looking at this particular blackbird. The voyeur in me was looking forward to all that self-revelation, but my hopes were quickly recalibrated as I read the opening “Contributor’s Note,” which describes Matone’s lifelong “collaboration” with his mother who, according to this note, not only wrote his school papers and graduate thesis, but continues to write his fiction, sending it to Martone via microcassette recordings. Hmm. Presumably there’s a core of psychological truth there — what a lovely acknowledgement of the extent of a parent’s influence on one’s art — but clearly not a literal one. Several notes later, we’re told that Martone’s mother died shortly after his birth, of complications resulting from a difficult pregnancy. What we have here, then, are short fictions, perhaps occasionally autobiographical, about a series of characters named Michael Martone. I do believe that Martone (the author) was born in Fort Wayne, Indiana, as asserted by all of the notes except one, which claims he was born in Story County — ha! — Iowa. I would love to believe that Martone (the author) once donned a millipede suit and served as a mascot for Fort Wayne’s millennium festivities, as we’re told in the note that begins on page 161, but it doesn’t matter that I can’t; his riff on Kafka made my day.

Why write an entire collection this way? Like a thought experiment in a philosophy class, this book describes forty-five alternate worlds, each closely resembling our own, inhabited by forty-five alternate Michael Martones. The final “Contributor’s Note” in the volume says Martone often finds the contributors’ notes to be the most interesting part of a magazine: “In a way it is like a party, Martone thinks, and when he revieves his contributor’s copy with his contribution and his contributor’s note in its pages, Martone most often proceeds directly to the contributors’ notes section to see who is attending this affair.” Michael Martone, then, is the party Martone has thrown for all his possible selves. And what self-respecting voyeur would miss that?

Like Mark Twain and Kurt Vonnegut, Martone is using a satirical eye to examine the multitude of artificial stories that we layer and layer on top of each other until they become a part of our collective myth system.

The Blue Guide to Indiana

The master of the nearly true is back with The Blue Guide to Indiana, an ersatz travel book for the Hoosier State. Michael Martone, whose trademark is the blurring of the lines between fact and fiction, has created an Indiana that almost is, a landscape marked by Lover’s Lane franchises and pharmaceutical drug theme parks. Visit the Trans-Indiana Mayonnaise Pipeline and the Field of Lightbulbs. Learn about Our Lady of the Big Hair and Feet or the history of the License Plate Insurrection of 1979. Let Martone guide you through every inch of the amazing state that is home to the Hoosier Infidelity Resort Area, the National Monument for Those Killed by Tornadoes in Trailer Parks and Mobile Home Courts, and the Annual Eyeless Fish Fry. All your questions will be answered, including many you never thought to ask (like: “What’s a good recipe for Pork Cake?”).

Michael Martone is a man with a mission, a fabulous inventor of history and memory, landscape and people. His quirky, magical tours hurl the reader across the borders between fact and fiction into a country of the mind where what we desire and fear fills our senses. Take the tops off your convertibles and fly! Indulge your secret curiosities! Trust The Blue Guide to Indiana to point you to some of the most delightful places on the planet.

Most of The Blue Guide to Indiana is hilarious, though none of it makes much sense — unless you’re from Indiana.

A skilled writer, Martone is a careful and insightful observer. His imagination is rich, but his anthropological skills help make the place he describes just as real as the Indiana we dull-witted visitors might observe.