Deborah McKay lives, writes, and teaches English at The Lawrenceville School in New Jersey. McKay’s writing spans many different disciplines and genres. She has published articles and short fiction in literary, religious, and philosophical journals. Eve’s Longing is her first published novel.

Eve’s Longing: The Infinite Possibilities in All Things

Ms. McKay’s book is a sui-generis record of an extraordinary spiritual journey. Like Thomas De Quincey’s Confessions of an English Opium Eater, it is shocking and exhilarating in its bluntness, and in the beauty and humor of the prose.

Eve’s Longing: The Infinite Possibilities in All Things 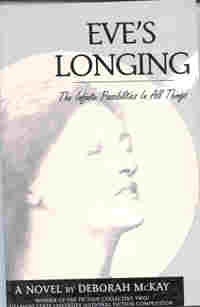 Eve’s Longing: The Infinite Possibilities in All Things is a story of a modern fictional saint in the making. In the course of Eve’s twin spiritual and physical journeys, Deborah McKay’s moving yet unsentimental novel explores alarming real-life resolutions to universal complexities and offers instead of answers the seductive and dangerous experience of its captivating central character. Eve is a shockingly original character: at once a philosopher, an artist with a highly developed visual imagination, and a visionary mystic. Her longing, as the subtitle suggests, is for “the Infinite Possibilities in All Things.” In the course of her journey, this longing, which is essentially spiritual and philosophical in origin, becomes for us immediately tangible, sensuous, and fully real. Eve’s longing takes her from New York City to a monastery in Assisi, Italy, the home of St. Francis, then back again to New York. Along the way her longing grows into a desire so intense that it engenders a compassion verging on the saintly and a cruelty equally as extreme. Her desires, when unfulfilled, lead to sexual excesses, hallucinations, and transformative spiritual visions. In the course of Eve’s journey we meet characters both alive and dead: her sister Claire, her parents, her lovers, St. Francis, and the Virgin Mary: and two of her most intimate companions, the Spiral and the Pearl String, both creations of her own mind. Eve’s Longing creates almost a new literary genre in literature. It combines the intimacy of an entrusting autobiography with the intrigue of a novel and the cool detachment of a clinical study. The consequence of Eve’s fascination with “The Infinite Possibilities in All Things” — the temptation to which the original and our Eve succumb — is both an end and a beginning.

An original, unsentimental novel about a woman’s longing for knowledge and luminous experience — and the price she pays.

Deborah McKay’s writing forces us to rethink how we see and feel about the world around us, and invariably the retooling affords us a deeper and more spiritual understanding of place and mood, gesture and human concern and integrity. This is the long-awaited work of a first-class writer, mind, and human being.

The character of Eve and McKay’s animation of little things make this book a lovely, eye-opening winner. The author’s talent runs deep.