Toby Olson, winner of the PEN/Faulkner Award for his novel Seaview, has published eight works of fiction — including The Life of Jesus, The Woman Who Escaped from Shame, Utah, Dorit in Lesbos, At Sea, and Write Letter to Billy — and many volumes of poetry, the most recent of which is Human Nature (New Directions, 2000). He lives with his wife, Miriam, in Philadelphia and in North Truro on Cape Cod.

Toby Olson is one of America’s most important novelists. 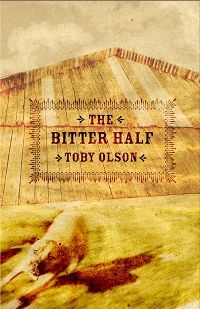 The Bitter Half disrobes the reality of gender, performing a striptease of masks and prosthetic devices, the subtle articulations and miscues of desire. A spit-curl lovingly tucked behind a diamond stud earring, hair brushed pageboy-style, a bibliographic collection of mastectomy scars: Toby Olson’s characters swarm with sexual multiplicity, each offering for exhibit a cyclorama of titillating identities.

This game of poses, of one self revealed within another, opens in a jail in Depression-era Pearce, Arizona. Chris Pollard, a consultant in the field of prison escapology, has arrived to investigate the case of an inmate who’s broken out of every prison in which he has been detained. The two develop an evasive fondness from a distance — an attention to cowlicks and thin lips from between bars. Their relationship remains concealed among levels of identity, Russian Matryoshka dolls, a mystery within a mystery.

Nothing can detract from Mr. Olson’s ability to conjure gorgeous prose passages that celebrate the healing powers of friendship, the pleasures of love and lovemaking, and the inborn mystery and beauty of things in this world.

Toby Olson takes on almost everything that a work of fiction can bear.

The Blond Box uses cultural notions about genre fiction, pornography, and performance art to explore the dynamics of voyeurism and erotic desire as they relate to art’s strange and mysterious ability to effectively reverse the course of the gaze, and ogle and penetrate those who would ogle and penetrate it. The novel, set in the town of Courbet, Arizona, initially conforms to the conventions of the mystery novel: that is, it begins with murder. El Malabarista, pianist and juggler for a troupe of sexual performance artists, is found dead in the dusty wilderness, his fingers crushed. From there on, however, Box persistently frustrates reader expectations. The narrative itself juggles the “real” events of 1949 and 1969, and a draft version of a hack sci-fi novel that serves (much like the “novel-within-a-novel” in A. S. Byatt’s Babel Tower), as a metafictional commentary on the efforts of retired sex-theater artist, Roberto Mendoza; hairstylist/pulp writer, Dick DeLay; doctoral student, Sandy Redcap; and a host of other characters to, not only solve the murder, but uncover its motivation, which seems to be linked to El Malabarista’s knowledge of the whereabouts of a certain unspecified boxed treasure. By turns lyrical and scatological, puerile and cerebral, Box is at once a daring formal experiment and a good yarn, but, ultimately, a beautifully rendered meditation on the weird sexuality of art.

The Blond Box, like all of Toby Olson’s novels, proposes a world whose ordinary elements are gradually seen to be messengers of the uncanny and mysterious. By the subtlest of means, we are led to recognize the strangeness that informs both art and life. It is, in all respects, a wondrous book by a superb writer.

Of all the writers of his postmod generation, Toby Olson is the most forgiving. Even when writing of the most mundane acts — performing in a backwoods porn show, for example, or inaugurating an outhouse — he grants all his characters the full wonder and mystery of their lives, and strokes language as a lover might the flesh of his beloved. The Blond Box, like the most memorable of his work, skirts borders — geographical, artistic, metaphysical — and explores the mysteries found there, especially the unfathomable mysteries of art. Toby Olson is one of America’s most important novelists, and The Blond Box is perhaps his best book ever. A rich compelling read.

The Blond Box shimmers in a rich sheen of mystery.… At every turn Olson reminds his reader how information inevitably recovers ambiguity, how the tidiest sense of remembered history and constructed plot are more journeys into accident and chance, how everyday lives must play out against and amid the luminous, albeit clumsy, mystery of attraction and want. The language, as always with Olson, is broad, adamant, and stunning, this text a conjured place fit for extended habitation.