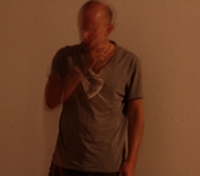 Doug Rice is the author of one novel, two collections of short stories, a hybrid philosophical book on photography and desire, and a hybrid memoir, as well as one of the co-editors for a casebook on Raymond Federman. His short stories, poems, theoretical essays and reviews have appeared in numerous journals and anthologies including Discourse, Zyzzyva, Gargoyle, Journal of Narrativity, Fiction International, Journal of Experimental Fiction, Avant Pop, and Biting the Error. He has been an artist in residence at the Akademie Schloss Solitude in Stuttgart, Germany, has taught at Kent State University — Salem and La Roche College, and currently teaches at Sacramento State University.

Doug’s words are always intimate, and always bring a raw or stung or visceral response. It takes a while to come back to yourself, sometimes, but when you do, you’re glad you’ve been.

The blood of the Mugwump clan of Catholic, gender-shifting vampires has become infected by decadent words and confused memories. (Not to mention the grey and muddy bodies that have washed ashore and that the Mugwumps have eaten.) Quirky flesh and cryptic desires created by a mysterious looking-glass (that refuses to reflect reality) have driven the Mugwumps beyond the thunderdome into their own house of incest.

Now, trapped inside a kinetic body that is always changing from male to female, Doug Rice (the youngest Mugwump) sets out to discover himself in his sister’s body. All the while, the familial matriarch — Grandma Mugwump (a woman who once-upon-a-time really was a man) — feeds on the flesh of young Doug. Once through the looking-glass, Doug realizes that Caddie (a polysexual Faulknerian nightmare of a sister) is more terrifying and holy than your average saint. A frenzied sexual virus, genetically conveyed, mutates and possesses the meat of Doug’s and Caddie’s bodies forcing them to love each other in unspeakable, yet classical, ways. Rice’s parasitical language is akin to the acts of those naked 18th century pirates of desire. None of this autobiographical fragment is in Rice’s original words. In Blood of Mugwump Rice cannibalizes the likes of Joyce, Faulkner, Burroughs, Eliot, and a whole host of dead angelic others.

The most gorgeous sentence and rhythms … I’m drooling and I bet that even Faulkner, though dead, is taking notice. Most impressive, however, is Rice’s entry into the gender wars. Rice redefines male (his identity?) and female (his other?) by submitting them to unremitting infinite questioning. What emerges is a poetry as analysis grounded in what must be called “the real.”

Where does desire become words? Under a new Sun of Melancholy placed in the sky by Doug Rice.… Rice names his companions in that valley: Bataille, Acker, Christ, Leduc, Goytisolo. He writes inside the turmoil of flesh, and uses the word Doug to nail his terror to the real.