Pamela Ryder is the author of the novels in stories Paradise Field (FC2, 2017) and Correction of Drift (FC2, 2008), and the short story collection A Tendency To Be Gone (Dzanc, 2011). Ryder lives in New York City.

It was with tears in my eyes that I made my way through the pages recording Ryder’s mission to bury her dead in a manner unique among the methods practiced by humankind. Her art is water for the thirsty, sustenance for the deprived. 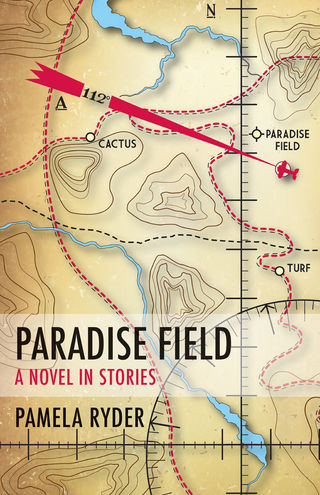 Paradise Field is a novel of interconnected stories depicting the last years of a WWII bomber pilot, his relationship with his daughter as both child and adult, and his drift into infirmity and death.

When life dwindles to its irrevocable conclusion, recollections are illuminated, even unto the grave. Such is the narrative of Paradise Field: A Novel in Stories, whose title is taken from a remote airfield in the American Southwest, and while the father recalls his flying days, his daughter — who nurses the old man — reflects as well.

Pamela Ryder’s stories vary in style and perspective, and time lines overlap as death advances and retreats. This unique and shifting narrative explores the complexities of a relationship in which the father — who has been a high-flying outsider — descends into frailty and becomes dependent upon the daughter he has never really known.

The opening story, “Interment for Yard and Garden,” begins as a simple handbook for Jewish burial and bereavement, although the narrator cannot help but reveal herself and her motives. From there, the telling begins anew and unfolds chronologically, returning to the adult daughter’s childhood: a family vacation in France, the grotesqueries of the dinner table, the shadowy sightings of a father who has flown away.

A final journey takes father and daughter back to the Southwest in search of Paradise Field. Their travels through that desolate landscape foreshadow the father’s ultimate decline, as portrayed in the concluding stories that tell of the uneasy transformation in the bond between them and in the transcendence of his demise. Taken together, the stories in Paradise Field are an eloquent but unsparing depiction of infirmity and death, as well as solace and provocation for anyone who has been left to stand graveside and confront eternity.

Let’s not futz around. I’m old, a Jew, a man who, but for the fates in charge of the trivialities, might have been Ryder’s father. Well, for all that, I am Ryder’s father or, anyhow, a father of Ryder, and will, accordingly, go agreeably to my grave praising her name as if my doing so might work for my daughter the favor of the gods. Let me tell you — in the matter of my thinking what must be said when an occasion such as this has come to take me by the heart: it was with tears in my eyes that I made my way through the pages recording Ryder’s mission to bury her dead in a manner unique among the methods practiced by humankind. Her art is water for the thirsty, sustenance for the deprived. I ask you, which of us is not perishing from the logic of the insufficiency woven into the world’s conceivable answer to our unappeasable cries? Ryder, her soul, her sentences, they are one thing, and this totality is given as an exception — the valedictory gesture of a mensch, this Pamela Ryder, enacting her livelong promise via the ceremonies of Paradise Field. Listen to me — my daughter brings comfort, brings balm, brings the exhilarations of loving and kinship to all those who would, by words, be cured.

Ryder writes with wit, brio, and laser-like honesty about her father — a man who, having eluded her for decades, is now at the end of his life. The Kafkaesque nature of caretaking and the obscene depredations of age are interlaced with a kind of cockeyed delight: eating a blintz in hell, regarding the clouds, giving death the (frail) finger. Ryder has both the ear of a poet and the soul of a warrior.

Dawn Raffel, author of The Secret Life of Objects

Paradise Field digs even deeper than ever before into the fertile ground of family and fathers and daughterhood and tells us what it is to live and die with strength and grace and indignity and meaning, what it means and what it feels to be, in the end, left alone to our own devices. What it means, in the end of all endings, to tend to those emotionally loamy gardens, to give due passage and a ritualized bidding adieu to those we call our own — in this case the father of this book, a WWII fighter pilot, a man who most often, in Ryder’s own words, was a man “gone, flying to parts far-flung.”

Peter Markus, author of Bob, or Man on Boat

I first read Pam Ryder’s eloquent stories over ten years ago, and thought she was one of the most powerful prose stylists I had ever encountered. Correction of Drift is dazzling, original, and brings something completely new to American letters. 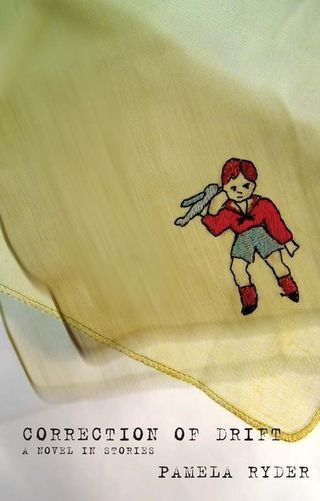 Correction of Drift explores the lives behind the headlines of the Lindbergh baby kidnapping, evoking anew the scope of tragedy through the vision of literary fiction.

It was called the crime of the century, and it was front-page news: the Lindbergh baby kidnapping. Correction of Drift: A Novel in Stories imagines the private lives behind the headlines of the case, and examines the endurance — and demise — of those consumed by the tragedy.

Every character brings a different past life to the event, be it a life of celebrity, or of misfortune and obscurity. There is Anne Morrow Lindbergh — daughter of a millionaire, the shy poet who married a national hero; Charles Lindbergh — the rough-and-tumble Minnesota barnstormer, who at age twenty-five made the first transatlantic flight, bringing him world-wide prestige; Violet — the skittish family maid with a curious attachment to the boy and a secret life that lapses into hysteria and self-destruction; and the kidnappers — an assembly of misfits with their own histories of misery. All are bound by the violence, turmoil, and mystery of the child’s disappearance as it becomes evident that each life has been irrevocably changed. Patterns of bereavement and loss illuminate these stories: despair at the death of a child; the retreat into seclusion; the comfort and the desolation of a marriage. But the heart of this novel is the far-reaching nature of tragedy, and the ways the characters go on to live — or end — their lives.

Pamela Ryder opens up the well-known story of the kidnapping of the Lindbergh baby to illuminate the ways we drift off course — perpetrator, victim, caretaker, witness — and are subsumed by the dream of memory and longing. With gorgeously precise language, she slips between the cracks in intractable surfaces, revealing the inexpressible word.

Ryder, Ryder, you’ve done it, you have done it! — made that which no one else has made. Isn’t firstness the consolation? Ask the ghost of Lucky Lindy. Oh, the occurrences, with what cruelty they will come to have their way with us. But to have been first at something, first at anything, as in having crossed an uncrossable distance — by air, let us say, or by word — is this not the deed? And thus, in proof of this, the luck of those who hold this ghostly book, this inconsolable haunting, in hand.

Correction of Drift is a dreamy divagation of a novel, an elegiac lullaby, soothing and terrible, sung over the empty crib in the Lindbergh nursery. Ryder reimagines the event in shard-like sentences, some pretty as beach glass and others ugly and sharp, and these sentences and the sentence fragments and the headlines and ransom notes accrue to powerful effect until even the table scraps, “crusts, bones, trimmings of fat,” seem ominous portents of violence and loss.