Rachel Salazar was born in Paris, grew up in Northern California, and lives in New York City. Spectator is her first novel.

Rachel Salazar’s novel moves forward like startling sequences of film. In precise frames she choreographs a brilliant play-off of dalliance against passion, of spectatorship against the commitment of art. 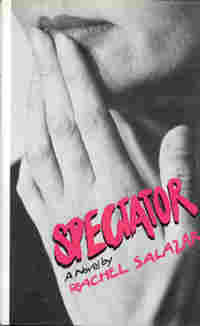 In Spectator, Rachel Salazar traces the course of disaffection, conveying its inexorability in a hallucinatory narrative about the precarious nature of love.

Shuttling between the unconventional artists’ milieus of Lower Manhattan and Mexico during the late seventies, Mara, a young American, and Rafael, a painter, are collaborators in the inevitable dissolution of their marriage. The novel unfolds in a montage of emotionally charged yet ambiguous scenes, rendered with delicacy and precision.

As the novel progresses, fantasy overtakes reality in a disturbing series of episodes: a nightmarish wedding during which Maria — who wears black — dreams away the ceremony; a brief reconciliation in the empty swimming pool of a Tehuantepec hotel; Mara’s impulsive affair with a Japanese dancer; a jealous confrontation in a Chelsea belly-dancing club; a fragmented videotaping of a famous South American writer; and a lavish transvestite party that climaxes in an act of surreal violence. By the very opacity of its cinematic imagery, this novel insists on the uncertainty of attachment and the essential mystery of human actions.

Mara, the spectator of this economically assembled collage of sensuous episodes, places, & people, floats into & out of her marriage to a Mexican painter … like an opalescent mermaid. She is almost tragic in her separateness. Her story invokes the mood of a twilight journey in a glassbottom boat.