Michael Seide is the author of The Common Wilderness. He is married to the writer Katharine Shattuck, and lives on Roosevelt Island.

Michael Seide’s The Common Wilderness is an original, energetic, language wrought, imaginative work by a daring writer. It is a lusty, intricate novel of a life in the Thirties ascending in art. 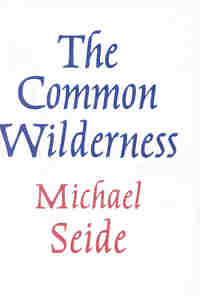 The Common Wilderness is the chronicle of Joe Bellinson who, at the classic age of twenty-one, is in crisis in every facet of his life in a historic time of trouble, namely, the Great Depression. The drama begins the day he declares he is going to quit his job. It ends after a week which seems like a century. The story itself is as pure as a table-line used in drawing. The protagonist is such a thinking animal that he compels the writing to be as dense as it is polyphonic in order to incorporate this added dimension, this aura of a mind in action. Above all, he is a natural in-person who quickly attains a plural identity as he moves with increasing awareness and excitement through this vast urban conglomeration of things multiplied by people. People themselves are the themes. It is through this inescapable presence of people that he discovers that he cannot act independently without involving others, that the basic human condition is not merely one of isolation, but also one of almost indescribable complicity. The terrible stalks him everywhere. Yet each path of the maze of this common wilderness which he invades, and through which he must wander, is quickened by his wit and illuminated by his wonder. Until finally it is for us as it is for him. One of the truly tremendous journeys in life is to travel from terror to revelation. At the heart of which is a universal and overwhelming compassion. The Common Wilderness succeeds in taking such a giant step.

An astonishingly determined, sustained, lyrical and profane work that takes us up from the city streets to the heights of witty despair that is really an exultation of language. For all its harsh material, it is wholly a literary work — many-tongued, bitter, solid in every pore. It hit me very hard.

Hart Crane’s “the fury of the street” is one of the great phrases of our literature since Baudelaire, when, in the “ant-swarming city,” “the ghost in broad daylight plucks you by the sleeve.” Michael Seide has caught and articulated this fury, has made it lament and scream and sing: has bodied forth the city-sensibility at its most naked and creative. His vision is all-out, and his language matches it. I have read no more powerful and releasing books in years.

Mike Seide’s epic novel is the greatest creative effort I have been associated with in my lifetime — thirty years in the making. If it calls forth unused mental muscles in the reading, think of what a galaxy of brain-cells (and every other kind) it forced to their fullest in the writing. There is no book like it in America, there will probably never be another; its niche is secure, even though time and tide and controversy will wash over it before its true features are made permanent and clear. Seide, at 70, is the last and youngest member of a dedicated literary generation — the modernist generation — to “go all the way.” It was all promised in the stories discovered by Katherine Anne Porter and Robert Penn Warren, and published by Harcourt, Brace in the collection, The Common Thread to splendid reviews by John Chamberlain, Isaac Rosenfeld and Mark Schorer. Now here is the heroic fruit. Eat slowly, it’s a dish unlike any other.