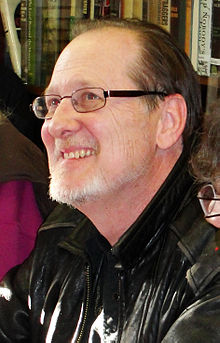 John Shirley was born in Houston, Texas, in 1953 but spent the majority of his youth in Oregon. He has been a lead singer in a rock band, Obsession, writes lyrics for various bands, including Blue Öyster Cult, and in his spare time records with the Panther Moderns. He is the author of numerous works in a variety of genres; his story collection Heatseeker was chosen by the Locus Reader’s Poll as one of the best collections of 1989. His latest novel is Wetbones.

Few writers — if any — handle SF, dark fantasy and psychological horror alike with as much panache as Shirley. But there’s depth beneath the scintillating surface, as Shirley plumbs not just the minds but also the souls of those who walk on the wild side.

In New Noir, John Shirley, like a postmodern Edgar Allan Poe, depicts minds deformed into fantastic configurations by the pressure, the very weight, of an entire society bearing down on them. “Jodie and Annie on TV,” selected by the editor of Mystery Scene as “perhaps the most important story … in years in the crime of fiction genre,” reflects the fact that whole segments of zeitgeist and personal psychology have been supplanted by the mass media, that the average kid on the streets in Los Angeles is in a radical crisis of exploded self-image, and that life really is meaningless for millions. In “I Want to Get Married, Says the World’s Smallest Man,” a crack prostitute’s state of mind degenerates so far as to become entirely mechanical. These stories also bring to mind Elmore Leonard and the better crime novelists, but John Shirley — unlike writers who attempt to extrapolate from peripheral observation and research — bases his stories on his personal experience of extreme people and extreme mental states, and on his struggle with the seductions of drugs, crime, prostitution, and violence.