Peter Spielberg was born in Vienna, Austria. He has been teaching English at Brooklyn College, City University of New York since 1961. Spielberg has been awarded fellowships in fiction by the New York Foundation for the Arts and by the National Endowment for the Arts. He is the author of five other books including Hearsay (FC2, 1992), Crash Landing (Fiction Collective, 1985), and The Hermetic Whore (Fiction Collective, 1977).

Equally successful in his saturnine or sanguine aspects, Spielberg re-creates life and death with bristling vigor.

The Noctambulists & Other Fictions is a collection of spare, deadpan tales in which life’s absurdity acts as a gateway to an even more confounding reality. Here, social mores are recycled, like so much scrap metal, in the name of extremist conservation, gender roles are mere foggy memories, and one man’s life’s work is another’s garage sale. As timely and relevant as they are fantastic, these stories make common sense of paradox, and find insight in a world that resists interpretation.

“Withholding” is the story of a modern divorce — “a sensible end to a sensible alliance.” Cliff and Connie are little more to each other than the pair of birch armchairs they divide in their break-up. When their detachment begins to crack, however, their apartment is set ablaze, and love jumps through the window, in the guise of a female firefighter. In “Vanishing,” a man finds himself, during a power outage, alone in a soulless necropolis. With a bloody foot and his key broken off in the door of a dark and maze-like tenement, he manages to talk a hopeless poet out of suicide, but struggles to escape his own paralyzed life. The “Noctambulists” of the title story are the wards of nursing homes, turned out on the mercy of an unnamed city. Gangs of grizzled senior citizens roam the streets, and the rap of a cane at one’s door at midnight could mean the return of a lost parent, or the arrival of a ghostly houseguest.

Spielberg’s latest collection recalls the work of John Hawkes, Robert Coover, and Don DeLillo. These haunting stories, like modern fairytales, draw us unconsciously through the mirror; until we find ourselves half-drowned, washed up on the bank of the East River, our head in the arms of a stranger, looking out at the world we knew, and laughing.

The truth is slippery, comes in several versions, and doesn’t change anything. Spielberg’s mock solemnity is often amusing, particularly as it concerns Lem’s sexual innocence … 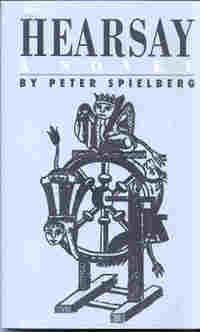 Like his namesake, Lemuel Gulliver, Lem Grosz, the central character, sees a fair bit of the world, and it is a very odd sort of place. Leaving home at 15, Lem travels from New York to Los Angeles, where he becomes a flagpole sitter and unsuccessfully tries to “shed his humanness.” Returning to New York a decade later, Lem finds a home (and begins an affair) with divorcee Connie White; he (mistakenly) thinks he has found his half-sister Lucy in a masseuse named Lucia Lamour; and he is astonished to come home one day and find Connie in bed with Lucy. Lem hits the road again, this time as a courier. During a mysterious assignment in Prague, for reasons not fully explained, one John Swift tries to kill him off but fails, dying in the attempt. Lem jets back to New York, where no one expresses any surprise when he takes over John Swift’s life: name, wife, child, and job. Spielberg’s tale tries to be whimsical in a darkly satirical way but never loses its air of studied eccentricity: the author, who needs wings of gossamer to pull this one off, seems mainly to have feet of clay.

Picaresque tale somewhat in the manner of Swift’s Gulliver’s Travels, by the author of The Hermetic Whore (1977) and Crash-Landing (1985). Running from the fearful wrong he feels he’s done his half-sister Lucy, young Lemuel Grosz ponders his options and goes on the road. Spielberg offers a short tribute to Jack Kerouac as Lemuel grows up; there’s a nice scene at the Grand Canyon. Now hailing as Mel, Lem returns to Manhattan and takes up with his landlady Connie, but what might have happened to Lucy still troubles him. So he hires a private detective who assembles an admirable dossier on the wrong Lucy. This Lucy is a masseuse, whom Lem invites to live with him as his long-lost sister. She promptly seduces Connie, sending poor Lem on the road again, abroad this time. Meanwhile, we drop in on the true Lucy, happily married in a gentrified section of Brooklyn, untroubled, unconcerned about Lem. The plot meanders through the rest of Lem’s life, when at last he learns the truth about Lucy. The truth is slippery, comes in several versions, and doesn’t change anything. Spielberg’s mock solemnity is often amusing, particularly as it concerns Lem’s sexual innocence, but perhaps the most original effect here is implied in the title: All the scenes are written as if heard secondhand or recalled after the fact. Even Spielberg’s US, for instance, is a distant country, as if the account had been translated several times from the original description. 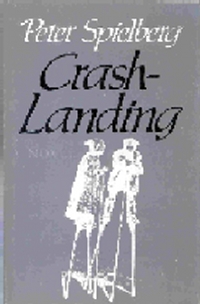 Crash-Landing is an exploration of modern day fear and failure. Its subject is self-delusion and self-fulfillment, sexual entanglements and midlife anxiety, marriage and existential loneliness.

Named after Lindbergh, his parents’ hero, Charles Burg has neither the requisite head for heights nor the stomach to go it alone. Though destined for a fall, he contrives — by never looking down — to keep his marriage to Anne aloft through years of circling, of buffeting crosswinds, instrument failure, and near collisions. When the crackup finally comes, the touchdown is not a tragic, flaming wreck, but a nose-in-the-mud return to ground zero.

Both survive the forced landing. Anne comes through better: she manages to walk away from the wreckage. Chuck crawls off, emotionally grounded. We last see him fleeing across the Atlantic, winging toward an eighty-day crash cure at a rehabilitation camp for bereaved ex-husbands “some twenty kilometers south of Brest.”

Or rather, that is the reader’s first glimpse of this comedy’s anti-hero, for events unfold in reverse order of appearance — from the crackup back to the passionate beginning that led to the marriage. The story’s counter-chronological movement gives the reader foresight, while Chuck, its first-person narrator, remains, happily or ironically, unaware of the laws of physics that govern the all too short duration of love’s flight.

A very funny and human [novel] about midlife crisis 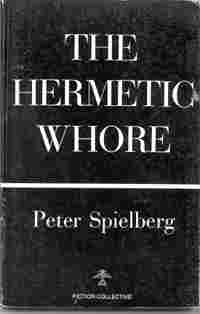 The Hermetic Whore is a dark compilation of a dozen short stories, each providing a unique view into private lives of individuals and the breakdown of public order. From the near-apocalyptic changes of women giving up skirts and social acceptance of sexual self-gratification to the absurdity of a pair of cats being the guardians a young girl’s virginity, each story provides social commentary on the ever-changing world. Spielberg provides a unique view of some of the most pressing social problems such as children divorcing their parents to an old survivor of the Holocaust being ushered into death with his oblivious family standing nearby.

A brilliant, marvelous novel. Mystifying and haunting, the book, like all great art, creates a world. 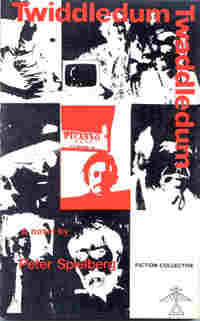 A half serious, half joking take-off on the traditional developmental novel, Twiddledum Twaddledum presents the fortunes and misfortunes, the adventures and misadventures of a young man in search of himself in an absurd world where opposites are identical twins but never reconciled. Hate and love, pleasure and pain, victory and defeat, birth and death, fear and courage, lust and nausea are only surface masks beneath which we’ll find, as the title implies, the same face. This satiric novel mirrors a schizoid world in which dangers are part actual and part imaginary; where punishment is sought yet fled from; where guilt is accepted at the same time that it is denied; where fiction and reality are interchangeable.

A remarkable new work by Peter Spielberg, the author of Bedrock, a collection of related stories whose metaphors extend realistic situations into conditions of neurotic existential stalemate … notable for their spare, stripped style and pungent understatement … raw, inventive stuff.

A brilliant, marvelous novel. Mystifying and haunting, the book, like all great art, creates a world.