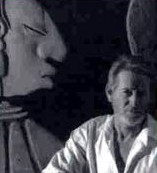 D. N. Stuefloten was born in Redding, California, in 1939, the son of Norwegian and German immigrants, and grew up in Hemet, then a farming community wast of Los Angeles. He started writing at age nine and traveling at eighteen. He has been a smuggler in Bombay, a black-market money changer in Ceylon, a seismic dynamiter on an oil-exploration crew in Australia, a fisherman in the South Seas, and a magician’s assistant in East Africa. He has wandered from place to place, living mostly hand-to-mouth, sleeping under bridges, often hungry, surviving because of a strong back and a quick eye for opportunity. He was smuggled into Borneo by Moro pirates — their outrigger canoe had a machine gun in the bow — and has lived clandestinely in the Mayan ruins of Palenque. He once spent nearly seven straight years in the United States, which he found terrifying. His novels represent his attempt to describe the America he saw, to demolish it, artistically. He now lives much of the time in Mexico.

The Mexico Trilogy: The Ethiopian Exhibition, Maya, and The Queen of Las Vegas (1996)

The Wilderness … straightforwardly explores a humanity-crowded wasteland of grit and beauty. Indian city is Indian city, African bush African bush. The portrayal of alienation focuses on the living heart of the matter. And the beauty in the writing evokes beauty even in the grit.

A novel that works on our nerves, The Wilderness examines human flesh in all its gruesome fascination: disease, madness, hunger, the taste of flies in the mouth. By day, the story describes the winding streets, filth, and poverty of the Indian coastal town of Cochin, as seen from the carriage of a three-wheeled trishaw — the ring of its bell a lament and a warning. By night, it follows the crooked path of the dead cart, collecting the deceased or the nearly deceased. Its narrator creeps through the halls of a whorehouse, catching sight of himself in a mirror — pale, fearful. Death, the narcissist.

The Mexico Trilogy reads like a hallucinatory exercise in unnerving and displacing the reader.

The Mexico Trilogy: The Ethiopian Exhibition, Maya, and The Queen of Las Vegas

It would be a mistake to surmise that Stuefloten’s Mexico Trilogy is actually about Mexico in any way. Instead the works are bound together in one volume because the author found the inspiration to write them while living in Mexico. Of the three short novels here, both Maya and The Ethiopian Exhibition were previously and separately published by FC2. Given the weakness of the third piece, The Queen of Las Vegas, it makes sense to prop it up. Maya is by far most coherent of the three, but The Ethiopian Exhibition also merits notice because of its careful use of symmetry and elaboration to illustrate an oddly poetic, however pedantic, point. Nevertheless, The Mexico Trilogy reads like a hallucinatory exercise in unnerving and displacing the reader. Recurring characters and metaphors describe bucolic, fecund societies which have been corrupted and virtually destroyed by Western commercialism and imperialism. Despite the apparent influence of the French New Novel and Stuefloten’s self-conscious and meta-approach toward writing, the trilogy falls short of evoking the uneasiness we are supposed to feel. Instead, the end result is nothing but prosaic passages infused with bitter melancholia.

… The Ethiopian Exhibition … merits notice because of its careful use of symmetry and elaboration to illustrate an oddly poetic, however pedantic, point.

While World War II rages in Europe, John Twelve climbs onto a four-cylinder Indian Motorcycle and crosses Ethiopia, searching for truth, for beauty, for mystery. At the same time, a modern American girl strolls the streets of Puerto Vallarta, where she is accosted by a film director — actually Ahmed, an Ethiopian murderer. He is making a film, he explains, about a man crossing the Ethiopian desert on a motorcycle. The girl accepts a starring role — and with this embarks on an adventure that takes her beyond the limits of ordinary reality. Her companions on this mystery tour include Sheba, the 3,000-year-old Queen of Ethiopia; Prester John, the legendary King of Ethiopia; and the Emperor Haile Selassie, the Conquering Lion of Judah. The innocent American girl, now called Dominique, watches in amazement and alarm as the world reveals an esoteric reality that she never knew existed. In The Ethiopian Exhibition, Stuefloten continues his obsessive examination of delusion and violence begun with his first novel, Maya.

Astride a battered motorcycle, John Twelve crosses the mysterious Ethiopian desert, where at night women become phosphorescent, glowing like the flowers, birds, and animals whose luminescent “sexual organs … produce a kind of incense.” He encounters Haile Selassie, the Queen of Sheba, Prester John, a rock star named Fang, hookers in Mickey Mouse T-shirts, and a lovely American girl under the sway of Ahmed, the assassin. Or so it seems in this elegant and sensuous but needlessly ambiguous work of magical realism. As it happens, Ahmed is a director making a movie called The Ethiopian Exhibition about “a man who foolishly crosses Ethiopia. On a motorcycle.” The others are actors. Maybe. They all make their way to Emperor Selassie’s summer palace followed by Nazis, tourists, and children deformed by the local chemical plant to shoot the final scene in which John, played by Fang, throws himself, naked, over the parapet onto the village square. Maybe. Recommended for literary fiction collections.

Stufloeten … sees America with a jaundiced eye that skews reality and perceives normalcy as frightening. The disjointed plot and script-like writing style of Maya takes place on several levels, revealing the author’s exceptional powers of description and observation.

Maya is an overlapping palimpsest of media violence and real violence placed ambiguously in the studios of Hollywood, the jungles of Vietnam, and the myth-saturated backlands of Mexico. It projects a dense atmosphere of sexual violations echoing ancient sacrifice, decadent Western interlopers, a pernicious exoticism. Above all, a confusion of the real and the make-believe, leading one to question distinctions between the two and to speculate on the influences of the one on the other. Taut, script-like paragraphs generate a tension reinforced by an acute awareness of local flora and fauna, weapons, the glitz of movie-making against a background of poverty. How, finally, can we tell the camera from what it shoots?

In Maya, Stuefloten focuses on an America fascinated with violence and fearful of fertility. Invasions, whether military, sexual, or cultural, occur and recur. The fecundity of nature vaguely threatens. Vegetation rots; the earth swells. Bomb blasts resemble flowers bursting open. The title “Maya” refers not only to Meso-American people described in the novel, but also to the Hindu doctrine of the delusory nature of reality. The world, Stuefloten asserts, is mysterious, very beautiful, and very dangerous — and America is more a part of it than we have imagined.

This first novel from Stuefloten, whose biography includes stints as a smuggler and black marketeer, is disappointing — if only he had drawn more heavily on his past for this tale of violence and sex on a movie set. The book is a series of 36 brief vignettes that begin as “shots” from a film in progress. Stuefloten gradually transforms them into a film-within-a-film and finally into a novel-within-a-novel. The book focuses on an ill-matched trio, an untalented but voluptuous blonde, a failed playwright who in desperation turns to acting, and a jaded and aging matinee idol who is losing his looks. The three are stranded somewhere in Mexico making a movie about the Vietnam War. Or is it a movie about being stranded in Mexico making a movie about the Vietnam War? Relentless overwriting, facile philosophizing and an all-too-easy equation of sex and violence (“Semen flew through the air like shrapnel, precious seed spilled like blood …”) pervade the book, which only comes alive in the final section, in which Stuefloten reveals his own role in its creation. Suddenly, but briefly, Maya flashes with wit and charm and suggests that its author has talent waiting to emerge more fully.

Maya is a disturbing collage of mixed visions with psychedelic qualities.… Stufloeten … sees America with a jaundiced eye that skews reality and perceives normalcy as frightening. The disjointed plot and script-like writing style of Maya takes place on several levels, revealing the author’s exceptional powers of description and observation.