Yuriy Tarnawsky is a bilingual American/Ukrainian writer, born in Ukraine but raised in the West. He is a member of the avant-garde group of Ukrainian émigré authors The New York Group, Fiction Collective, and the Association of the Writers of Ukraine. An engineer and linguist by training, he has worked as a computer scientist and professor of Ukrainian literature and culture at Columbia University in New York City. His work has been the subject of a number of dissertations and monographs, and for his contribution to Ukrainian literature, in 2008, he was awarded the Prince Yaroslav the Wise Order of Merit by the Ukrainian Government. He resides in White Plains, NY.

Yuriy Tarnawsky has authored nineteen collections of poetry, seven plays, eight books of fiction, a biography, a number of articles dealing with literature, film, and theater, and numerous translations from and into Ukrainian. His play Not Medea was staged as a workshop production at the prestigious New York Mabou Mines Theater. His FC2 publications are Meningitis (1978), Three Blondes and Death (1993), and Like Blood in Water (2007).

His latest publication is a collection of short stories Short Tails (JEF Books/CC, 2011). Forthcoming are his selected essays and interviews Flowers for the Patient (Piramida Publishing, in Ukrainian), and a book of poems, Modus Tollens (Jaded Ibis Press).

His works have been translated into French, German, Polish, Portuguese, Romanian, and Russian.

Tarnawsky is the real artist. Like Blood in Water carries his experiment deeper into the American night, with work that is bright and moving and original. Everyone needs to taste these works of one of our most daring and powerful writers. 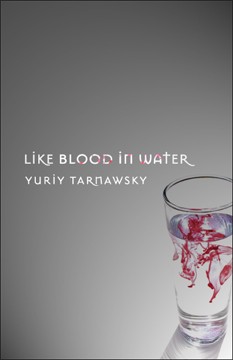 Yuriy Tarnawsky’s collection of mininovels is a surrealist account of the creative and destructive arts. Taking inspiration from music and the visual arts, Tarnawsky crafts a dense work of allusive prose and simple storytelling. The author interweaves reality with dreams and fragmentary thoughts, diffusing the elements of lives that are anything but mundane.

Like the imagery of the title, the prose creates a sense of permutation; the mininovels spread and converge into one another. His musicians, actors, and doctors reside in oddly formed apartments, abandoned churches, eerie sets. While they work, they find themselves in states of literal and figurative dismemberment, thinking of violence, blood, quick satiations of desire, burning loss. For these characters, nothing is stable. Time dissolves, ghosts come back, memories become labyrinthine vortexes through which they must struggle. Everywhere are archetypal imaginings, distorted perceptions, a deceptive past. The disconnections seem obvious, yet the synaptic lapses are ones that readers will eagerly navigate on their own.

Both comic and frightening, the mininovels reveal the human tendency to experiment with whatever is given. Tarnawsky’s language is elegant and careful, and his studied concentration of rhythm allows his work to transcend prose, nestling somewhere within the realm of musical composition. Reminiscent of Andre Breton, Gabriel Garcia Marquez, and Dostoyevsky, this collection exemplifies Tarnawksy’s claim: “The common thing about life is its uncommonness.”

There is much to be savored — and indeed learned — from this wonderfully opaque, yet at times surprisingly lucid and tender, collection of lapidary absurdities from Planet Tarnawsky.

Tarnawsky’s are the second opinions we seek, almost recognize, then do, for they are made of the sounds, power sources, bizarre jobs, people coming our way, fitted together both by us and a culture by turns demanding and uncaring if we sleepwalkers notice or not: alarming, intelligent, caught again and again in the grasp of the author’s surprise and yearning.

When I get rich I’ll get a pied-a-terre on Yuriy Tarnawsky’s planet. It’s very wild on the surface and cool and calm in the interior. The palm fronds don’t decay.

Tarnawsky’s work shows a brilliant style and artistic mind … impressive as to form and content, a rare combination in today’s experimental but otherwise dusty and dry world of art. 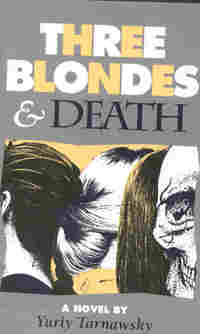 Based on a complex mathematical scheme that the author, a computer scientist and linguist, developed as a substitute for the traditional architecture of a novel, and written in a deliberately sparse and structured syntax that ruthlessly compartmentalizes reality, Three Blondes and Death is an hermetic and hypnotic treatment of the classic themes of love and death. Its strange protagonist, with the literally unspeakable name Hwbrgdtse, searches for meaning in life through the three women with whom he successively falls in love. He finds, however, only life’s absurdity, ending in death — a death to which his quest eventually reconciles him.

Three Blondes and Death takes place in an ambiguous time and geography that turn out to be present-day America. The relations between the protagonist and the objects of his love are totally perverse and destructive; the texture of their lives is deceptively simple but implies a dark and undecipherable complexity; and the angst of mortality hangs over every gesture. A lunatic simplicity governs the behavior of Hwbrgdtse, which enables him to face issues of love and death more directly than is usually the case with romantic heroes.

Tarnawsky’s third work of fiction is unusually readable, even magnetic, once we are drawn in by its hypnotic repetitions. The logical clarity of its style contrasts with the irrational, often dreamlike content. The action is stark and at the same time mysterious. Whether the strange sensibility that suffuses this story can be traced to the mathematically rigorous mind of its author, or to his Ukrainian roots, or to his multilingual background, Three Blondes and Death is an intriguing and unique work.

Short sentences, like the dots that appear on photographs hugely blown up, materialize Tarnawsky’s obsessive catalogues … As a registrar of mostly indifferent sensations, Tarnawsky is intriguing … when he allows conflict and emotion into his work, we are drawn.

Yuriy Tarnawsky’s book captures [the tragedy of death] with a power not frequently seen in our poetry.

A writer of extraordinary talent, Yuriy Tarnawsky has influenced many poets of the New York group. 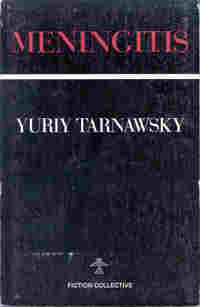 An extraordinary collection from the Ukrainian émigré writer Tarnawsky.

… a very individual style and a complex, well-developed personal philosophy. In his person Ukrainians have a very talented poet.

It is a pleasure to read Roads because it is so elegantly constructed. It is packed with original metaphors and similes.