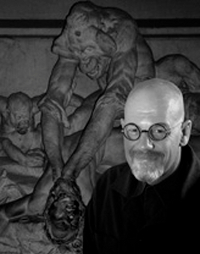 Incorporating narrative forms of all kinds — from comic books, travelogues, journalism, or code to Hong Kong action movies or science reports — Steve Tomasula’s writing has been called a “reinvention of the novel,” crossing visual, as well as written genres, and drawing from science and the arts to take up themes of representation, especially how people picture each other through the languages they use.

A Howard Fellow, he lives in Chicago. 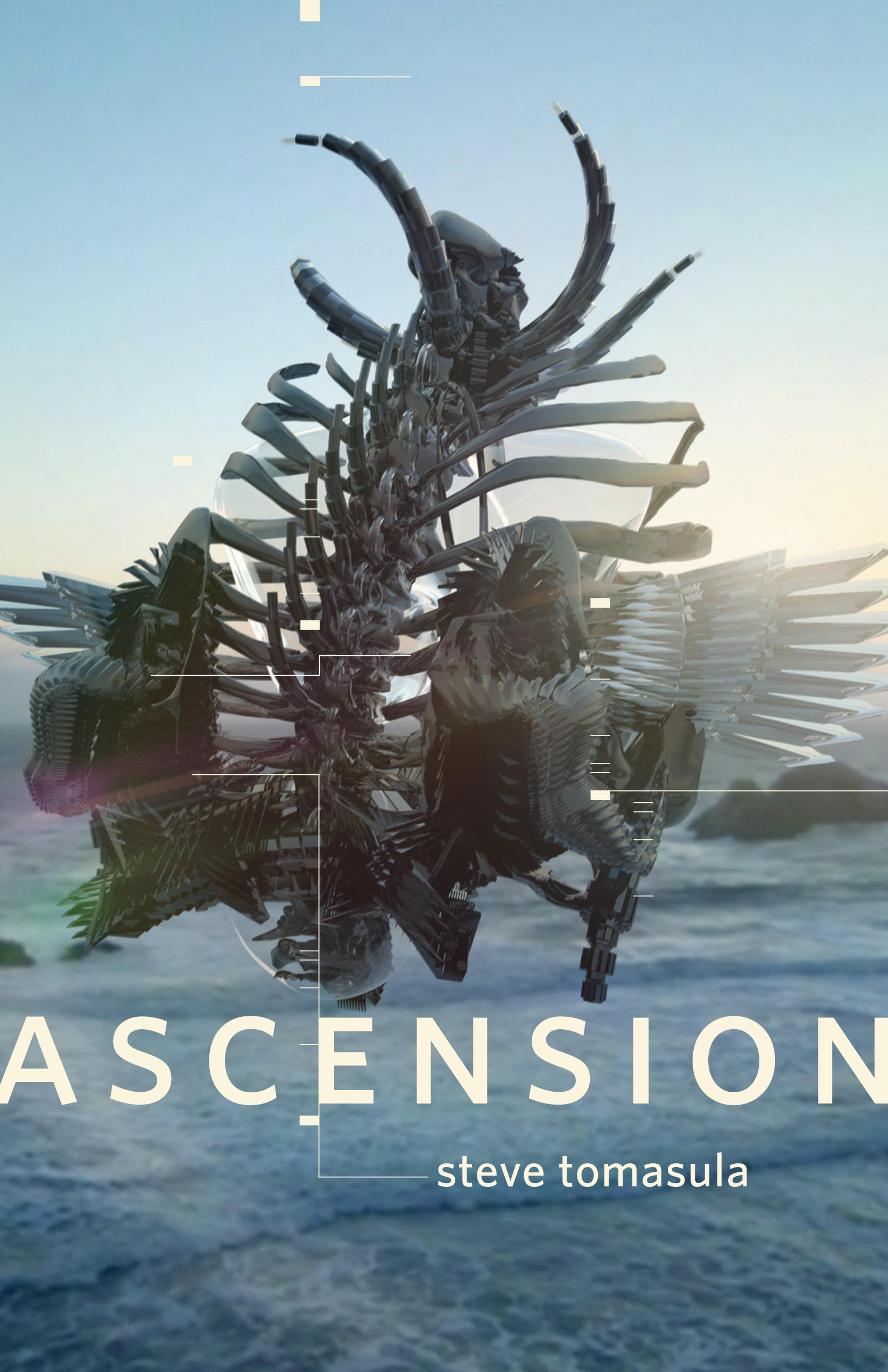 A visually stunning narrative of three eras in humankind’s vexed relationship with nature.

Ascension is a novel about the end of nature, or rather, the end of three “natures”: the time just before Darwin changed the natural world; the 1980s, just as the digital and genetic revolutions begin to replace “nature” with “environment”; and today, a time when we have the ability to manipulate nature at both the scale of the planet and at the genome. The narrative follows three different biologists on the brink of each of these cultural extinctions to explore how nature occupies our imaginations and how our imaginations bring the natural world, and our place in it, into existence.

Ascension is a story of how we continually remake the world and are in turn remade by the new nature we’ve created. It is the story of humans yearning to understand their families, themselves, and the world they live in as it comes to a close, leaving them to anticipate what will follow. Rich in visual depictions of the natural world — from nineteenth-century engraving and paintings to twentieth-century photography and twenty-first-century databases — Ascension uses the materials of three eras to drive home our inability to escape nature, and the ways our fates are irrevocably bound together even as our actions usher in an end-time.

In this epic-scale novel, Steve Tomasula uses multiple modalities and media formats to track the course of ecological impacts and change. From illustrations of contact encounters, to a movie script, to elaborate aerial views and data visualizations, Tomasula demonstrates his unique capacity to engage with technologies of knowledge in constructing his provocative narrative. As always in his projects, the result is a striking work of combined intellectual and creative force. He makes vividly evident the terrifying reality of our current dystopia as we careen towards disaster — starting with the epigraph “it did not have to happen this way.”

Johanna Drucker, author of Iliazd: A Meta-Biography of a Modernist

Steve Tomasula has opened up a lyric atmospheric experience for readers across time and space, playfully, beautifully, and sometimes frighteningly staged upon the page. In Ascension, the interplay between the human longing to understand who we are and our unstoppable will to pursue knowledge all of our creations and destructions are laid bare. What an epic story across three epochs of being and knowing — from Darwin to the digital revolution to the present tense. Breathtaking.

Tackling the catastrophes of colonization, digitization, and encroaching extinction, what history feels like at a scale where Homo sapiens become the size of stray thoughts, Ascension is both a brilliant contemplation of just how wrong we’ve become, how poorly we’ve read the text of our planet and ourselves, and a keen exploration into how we represent these unimaginables through our culturally inflected imaginations. Rich with vast research, thought, illumination, every page a unique visual space, Ascension is, like all Steve Tomasula’s work, a mind-boggling report sent back from the library of the future.

Lance Olsen, author of Skin Elegies and My Red Heaven

… Tomasula creates a new postmodern, post-human realism that richly traces our infinite potential of self-production, with just enough human left to give it a beating heart. 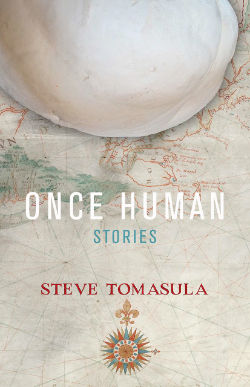 A stunning new collection of stories by a master fictionist, Once Human shows the ways to go beyond standard maps of simple understanding.

A manga artist who is afraid that she herself is slipping into a cartoon version of life, a lab technician who makes art with the cloning technology she uses at work, a sociologist hunting for the gene that makes some people want to take risks — these are some of the characters who populate the stories in Once Human. Exploring the spaces where life is shaped by science and the technologies we bring into being, Steve Tomasula’s characters often find that the harder they look at the world, the less they can say. The map that emerges from these stories charts the territory of human longing and the failure of poetry, science, and technology to explain the “why” of the world, if not its “how.”

… a valuable sampling of the work of a compelling and genuinely experimental writer.

… In Once Human, Tomasula impresses not only with his literary skills but also with the range of his knowledge.

TOC is an evocative, steampunk fairytale. It also represents a new literary genre: a marriage of conventional narrative and image use with the possibilities for fiction that are opened up by the computer. 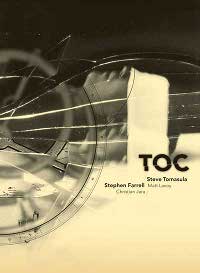 You’ve never experienced a novel like this. TOC is a multimedia epic about time — the invention of the second, the beating of a heart, the story of humans connecting through time to each other and to the world. An evocative fairy tale with a steampunk heart, TOC is a breathtaking visual novel, an assemblage of text, film, music, photography, the spoken word, animation, and painting. It is the story of a man who digs a hole so deep he can hear the past, a woman who climbs a ladder so high she can see the future, as well as others trapped in the clockless, timeless time of a surgery waiting room: God’s time. Theirs is an imagined history of people who are fixed in the past, those who have no word for the future, and those who live out their days oblivious to both. A new media hybrid, TOC re-imagines what the book is and can be. Produced as a DVD for playback on personal computers (both Macs and PCs), TOC retains the intimate, one-on-one experience that a reader can have with a book as it draws on the power of other art forms to immerse readers in an altogether new multimedia story.

TOC is an entrancing digital novel that explores temporality’s elusiveness and how, ultimately, the more we think about time, the less we really know about it. Reminiscent of Borges, Calvino, and Ballard, TOC functions less through plot than thesis, less through character than idea. Steve Tomasula’s latest is nothing short of brilliant.

With stunning visuals, a compelling and complex narrative, a gripping soundtrack, and a user-friendly but satisfyingly sophisticated interface, Tomasula’s TOC is one of the few pieces of digital media that feels fully integrated and profoundly literate. It brings us to the trailhead of the genre’s future, and then takes us a good way down the path.

… cutting-edge [but] surprisingly easy to navigate … a hard-hitting (and visually and aurally magnificent) rendition of one of the world’s most ancient moral lessons.

Marked by aesthetic ruptures, discontinuous narratives, and diverse modalities including video, textual fragments, animated graphics and sound, TOC creates a rich assemblage in which the conflicts between measured and experienced time are related to the invention, development, and domination of the Influencing Engine, a metaphoric allusion to computational technologies.… TOC explores its conditions of possibility in ways that perform as well as demonstrate the interpenetration of living and technical beings, processes in which complex temporalities play central roles.

Exploring untrodden paths out of the groove of language, TOC releases us to a different approach to temporality that may also provide a cure for … chronology.

The once-rare moment of creation in art and writing has become ubiquitous in the digital age. The Book of Portraiture reimagines what the novel, particularly the historical novel, might mean in the digital world, and it does so with verve, gusto, and style.

The Book of Portraiture 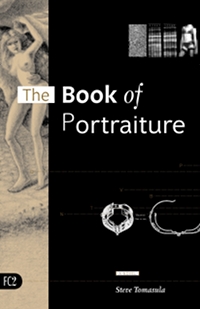 The Book of Portraiture is a postmodern epic in writing and images. A desert nomad struggles at the close of the ancient world to inscribe himself into life, and centuries later a Renaissance artist attempts to overcome his lowly origins by painting nobility. Throughout Steve Tomasula’s arresting tour de force, human beings seek to become what they are by representing it. An early twentieth century psychoanalyst in search of a cure for sexual neurosis discovers the reflection of his own yearning in a female client, and an accidental community of twenty-first century image-makers connects the pixels to bring their group portrait into focus. Across a canvas that spans centuries, the several narrators of this novel look through the lens of their own time and portray objects of desire in paint, dreams, photography, electronic data, and genetic code. Together their portraits comprise a collage of styles and habits of mind. The Book of Portraiture is a novel about the irrepressible impulse to picture ourselves, and how, through this picturing, we continually re-create what it means to be human.

The once-rare moment of creation in art and writing has become ubiquitous in the digital age. The Book of Portraiture reimagines what the novel, particularly the historical novel, might mean in the digital world, and it does so with verve, gusto, and style.

Whether questioning the ways we represent ourselves in writing and painting, exploring the act of reconstruction both at a subconscious level and a digital level, or presenting the possibilities of genetic creations, Tomasula’s The Book of Portraiture interweaves art and science, the tangible and the theoretical, in a search to explain human desires and how these desires drive us to create and re-create the human image.

Think of Swift, Groddeck, Lautreamont, and George Carlin conversing together in a large wastebin — up to their chins in 21st century sweepings — and you will begin to have an idea of Tomasula’s very funny, very smart, and downright scary epic vision.

Tomasula’s five interlocking chapters cross continents and centuries and aesthetic sensibilities to build to a dazzling and dizzying whole. The Book of Portraiture is one of those rare books that manage to be at once emotionally and theoretically satisfying.

Once again, Steve Tomasula has fabricated an incisive and sly commentary on art’s way of being in the world, and the manner in which it intersects, and conflicts, with our perceptions. Virtuosic in its execution, and sublime in its discernment, The Book of Portraiture is an able continuation of Tomasula’s ongoing project to redraw the boundaries of contemporary fiction.

… brilliant … the overarching theme of representation and self-portraiture, from cave art to computer code, gives this novel a historical sweep that is breathtaking. Like Joseph McElroy and Richard Powers, Tomasula can make intellectually engaging fiction out of forbidding (to some of us) topics like recombinant genetics, microbiology, computer technology, and other hard sciences, and utilizes the advantages of graphic design to go places even those gifted writers don’t go.… Tomasula’s finest creation yet.

What Tomasula accomplishes with The Book of Portraiture is exactly the resonance between the history in the novel and the history of the novel.… Certainly, its concern is with different historical periods, and, certainly it offers itself as a reflection on those periods. But the context of the Spanish Inquisition or 19th century psychopathology is not simply “re-created” through the transparency of narrative prose. Instead … Tomasula basically re-defines the novel …