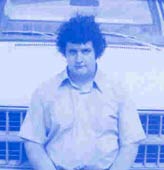 Don Webb is a 28-year-old Texan. His fiction has appeared in over sixty magazines in the United States, Great Britain, France, Norway, and India, including Atticus Review, Rampike, Isaac Astimov’s Science Fiction Magazine, MaLLiffe, and Prakalpana Literature (Calcutta). He has worked as a dockworker and a line operator in a corn-dog plant. He lives with his wife Rosemary in Austin.

A Spell for the Fulfillment of Desire

Don Webb can write straight tales or he can go out to the fringe where the cutting edge hasn’t even cut yet and play head-turning games and word games: a full spectrum writer.

A Spell for the Fulfillment of Desire 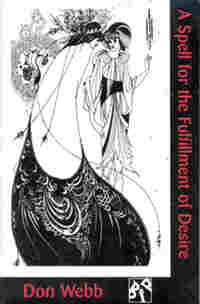 A Spell for the Fulfillment of Desire is a postmodern magical papyrus collecting the short fiction of Don Webb from around the globe, and presenting his unique views on sex, language, and fictioneering.

Drawing from science fiction, linguistics, and the artistic concerns of post-Fluxus avant-garde, A Spell for the Fulfillment of Desire provides us tales which are sexy, funny, and thought-provoking. A cultural artifact from a different star, his work straddles many boundaries.

[These] metamorphoses are bright, quick, certain, and unfailingly demonic … Webb’s stylistic virtuosity is amazing both in the sureness of his parodies and homages and in the extraordinary resolution he manages in imagery and story throughout the book. It is a strange, funny, frightening wonder, a Saturday kid’s show for grownups. 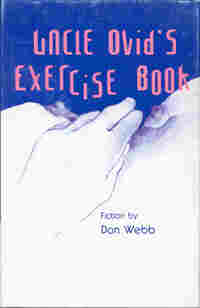 In these postmodernist episodes of high comedy, Don Webb turns Ovid’s classic work, the Metamorphoses, on its head. Awarded the 1988 Illinois State University/Fiction Collective Prize through a nationwide fiction competition, Webb’s first book of fiction, Uncle Ovid’s Exercise Book, explores the theme of change in hitherto unimagined manifestations — from the everyday to the mysterious to the miraculous. These eight dozen “metamorphoses” are widely funny, profound, and — like change itself — always surprising.

“Metamorphosis No. 39” resurrects the ancient Egyptian gods, Set, Toth, and Osiris, who return to America to mastermind a plot to alter contemporary consciousness. Their scheme includes the broadcast of subliminal archetypal images during returns of I Love Lucy. In a later metamorphosis, another ancient god — Dionysius — returns to modern day Atlantic City to recruit winos for a new band of satyrs.

Ancient gods are not the only agents of change. Metamorphosis also spreads to the White House in an episode describing the clandestine life of the president’s drug supplier — who risks death to satisfy the chief executive’s taste for organic hallucinogens.

A hilarious New Age western saga unfolds in “Metamorphosis No.5” W.B. Porter, the “Last of the Singing Cowboys” — a hero with a degree in chemical engineering and a proficiency on the sitar — foils the Uzi-toting Mendoza gang — “tough hombres schooled in the Fourteen Mysteries of Toltec Sorcery” — in their attempt to pull a heist on a condo construction project.

This theme of transformation extends even to the farming narrative of UOEB itself, which at one point unexpectedly becomes the diary of an Englishwoman who is held captive in a potting shed by a maniacal pastor.

These variations on a theme are sometimes hilarious, sometimes cryptic, sometimes curiously moving — and always disturbingly provocative. With his hat off to Ovid, Don Webb pulls together high-spirited wit, eclecticism, and sheer inventiveness to make Uncle Ovid’s Exercise Book a richly comic, absorbing, and singular work of a new order.

Uncle Ovid’s Exercise Book is a lively Book of the Dead for the 1990s, chanted by a chorus of uniquely demented voices. Imagine Sir James George Frazier meeting William S. Burroughs and H.P. Lovecraft for a quick round of musical whoopee cushions. Don Webb’s wit, erudition, and imagination seem to have no limits as he pulls (at least) 97 different rabbits out of a single hat. He creates entire worlds with a few luminous details, then shatters them to glittering fragments. I wish I could write this well.

Lewis Shiner, author of Deserted Cities of the Heart