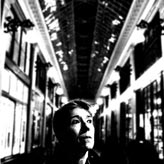 A. B. West lives in Belgium, where she has worked with the avant-garde theater company Théâtre Laboratoire Vicinal. She performed and collaborated on the original plays Tramp, Lunapark, and Chaman Hooligan. She was the director and sole actress of the play I (with a text by Frédéric Baal, and seven sculpture/stage-properties by Belgian sculptor Olivier Strebelle), which toured worldwide and was featured in a film by French television. It also toured for several years in the US, playing at the Guggenheim, the Brooklyn Academy, the San Francisco Museum of Modern Art, the Chicago Museum of Contemporary Art, etc. West has also been an agent, an editor with Wall Street Journal Europe, a freelance translator and a copywriter. Wakenight Emporium has been accepted for publication in France as Figurations Lumières.

A moody, intimate and lucid meditation on time, space and mortality, Wakenight Emporium mysteriously awakens in the reader deep, primordial, shadow longings. It is rare to experience a work of prose that inspires such wishfulness and hope, that suggests such option and possibility and at the same time such limitation. A beautiful, moving and ineffably sad book. I feel lucky to have read it.

In thirty-one vertiginous meditations, A.B. West reflects on the planet, the universe, dying, living, and what it means to be a being-in-time, all sorts of time: wide time, quick time, pure time. West attaches time to everything tangible, from procreation to Bach, from Martians to relativity theory, and from the fifth-dimension to the palindrome moth. And magically, this spinning text moves and clarifies. Simply. Cleanly.

Wakenight Emporium holds much for the philosopher, much for the poet, but there are also boundless riches here for the physicist, as West fascinates us with force, motion, velocity, and gravity. Her writing is the love-child of Einstein and Heidegger, obsessed with clicks of the second hand, the intricacies of now, the visible penetrations of genius. And in the midst of all, this book wants to blow the reader’s head open. What remains in the half-state between dreams and waking is a universe of stars.

These thirty-one rhetorical riffs are almost literally spell-binding; West’s Wakenight Emporium is a magicked work of words. Both abstract and specific, far-ranging and precisely, the voice of the speaker here dazzles — and it does so with power and wit. A startling, tentative as well as high-gloss finished product, this stay against confusion feels ambitious as well as achieved.

West’s book is a beautiful attempt to move the reader outside of mundane human experience — hence the focus on external perpectives: physics, Martians, birds, and insects with their own “raspy little affairs” — in order to arrive at a broader sense of humanity and the big scheme of things.

Experimental writing, the specialty of FC2, is only experimental if it doesn’t work. West, writer of highly poetic prose and adept at stagecraft, makes her writing work. One does not need to read more than two of her thirty-one meditations (plus one unnumbered one) that make up Wakenight Emporium to see that, although she builds precariously, she is firmly in charge.