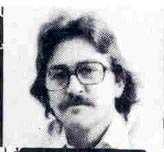 Curtis White was born in 1951 in San Lorenzo, California, a little pre-fab paradise for veterans of World War II. In 1981, he published his first book of fiction, Heretical Songs, with the Fiction Collective, and then published Anarcho Hindu in 1995. Two subsequent books of fictions, Metaphysics in the Midwest and The Idea of Horne, were published in the New American Fiction series by Sun and Moon. More recently, he has also published work with Dalkey Archive Press (Memories of My Father Watching TV, Requiem, and America’s Magic Mountain).

In 2003, White published a major work of non-fiction, The Middle Mind: Why Consumer Culture is Turning Us Into the Living Dead, with Harper San Francisco.

An Illuminated History of the Future (Editor, 1989)

Curtis White is a one-man band, a whirling dervish, a devil who speaks in tongues, a master of bewitchments, parodies, and dazzling tropes.

What if Western revolution and Eastern reincarnation were discovered to be the same thing? What if the Hindu classic The Mahabharata and Hugo’s Les Miserables were in fact the same book? And what would it feel like if one person were able to experience this epic east/west continuance in one life?

This delightfully eccentric novel orbits about the character of one “Siva,” a woman who is perhaps a Hindi divinity, probably merely a Midwestern housewife, but also very possibly a porn-queen. Her web of tales takes her bewildered husband and the reader on a mythic and philosophic storytelling trek from ancient India, to the Paris Commune, to the St. Louis Hegelians, and finally to a neighborhood very like yours.

Curtis White’s Anarcho-Hindu is an unabashedly learned investigation of these recondite matters. Like The Bhagavad-Gita, the epic tale of cousin aligned against cousin in monstrous self-destruction, Anarcho-Hindu is a book about people willingly conspiring in their own defeat. Against this self-inflicted human suffering, this novel proposes the gestures of self-understanding and play that can liberate us both politically and personally. The heroes of the book are the ghostly spirits of Marx and Krishna, together for the first time, engaged in the inspired play called Refusal.

Curtis White’s fiction presents a scintillate, ironic surface, one that is barely able to contain the bleakness of American fin-de-siecle exhaustion, which latter is his essential theme. It is superb work. 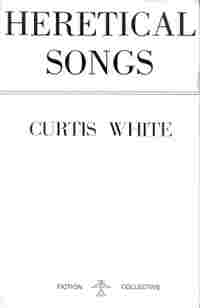 Heretical Songs is a book of historical fictions written by an author with an admitted aversion to historical fact.

The first two stories in this collection, “Mahler’s Last Symphony” and “The Poet’s Sister,” play on rumors about the domestic lives of Gustav Mahler and William Wordsworth. Mr. White toys with the thought of Alma Mahler’s infidelities and Dorothy Wordsworth’s incestuous rage.

In the next two stories, “Rossetti’s Blessed Lady” and “Claude,” two great men of art and life, D. G. Rossetti and Claude Debussy, are treated with more dignity. Delightful cameo appearances are made by the notorious pansexuals Algernon Swinburne and Eric Satie.

Finally, in “The Heretical Singing of Pietro Carnesecchi,” the novella which caps the book, the author takes advantage of the obscurity of the historical figure (who was executed by Duke Cosimo of Florence) to present Carnesecchi as a man with Bruno’s past, Savonarola’s future, and the character of Tomasso Campanella, the great Magician to the Pope.

A collection of short stories leading up to the eponymous novella, Heretical Songs was a worthwhile and enjoyable book. The author seems to be quite in his element — sculpting lofty intellectualizing, fanciful conjecture, and carnal innuendo into a truly unique look at the unseen lives of some famous public figures. While the prose was at times overwhelmed by its own vaguely sophomoric cleverness, the stories never truly faltered and I was deposited at the end of the book having fairly enjoyed the ride.