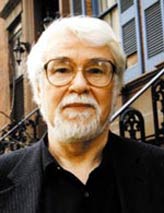 William S. Wilson is an art critic who lives in New York City. He authored the novel Birthplace: Moving Into Nearness, for which he was a Pen-Faulkner Award nominee. His short story “Anthropology: What Is Lost in Rotation,” was included in the 1977 edition of The Best American Short Stories. Wilson holds a Ph.D. from Yale University.

Wilson’s lucid and witty reverence for the fascination of the irreducible makes his “experiments” an irresistible comprehensible whole.

In a 1978 New York Times book review, Kenneth Baker described Why I Don’t Write Like Franz Kafka as “… the most powerful New American fiction I have encountered in years. A demanding, exhilarating work.” Nearly 25 years later, FC2 is proud to reissue this classic collection of short fiction by William S. Wilson that seems even more relevant today. It touches on controversies over the role of science in our lives and deals with cosmetic surgery and the medical uses of human embryos, heart transplants, and regenerated genitalia. And that’s only the beginning.

The story “Metier: Why I Don’t Write Like Franz Kafka,” implies that Kafka responded in his fiction to questions that no longer need to be asked in fiction. The epistolary story, “Conveyance: The Story I Wouldn’t Want Bill Wilson to Read,” is an intimate letter from a woman who had wanted to write fiction and who now challenges Wilson’s reaction to her report of a tragedy. “Interim” chronicles the imaginary reforestation of Scotland, and “Anthropology” turns on the actual moment in Structuralism when Claude Levi-Strauss relocates the ear to the back of the head in order to interpret a myth.

Written with cool precision and a subtle touch, these meditations and metafictions will continue to reverberate for decades to come.

… an ear for the frightening or ironic music in words … that should have the likes of … Barthelme looking to their laurels.