Alexandra Chasin is the author of Kissed By from FC2. This interview was conducted by Thao Thai upon the publication of Kissed By in 2007. 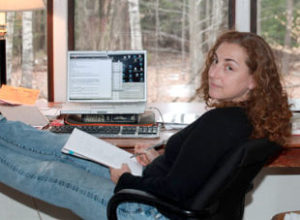 While some of your pieces seem intensely personal, such as “Why I’m Jealous” and “B & G & I,” others, such as “Toward A Grammar of Guilt,” are quite political. What do you think is the author’s role in society? Is it to educate, entertain, present a faithful depiction of the human experience, or some combination of the three?

The author’s role is to write whatever she wants to write however she wants to write it. If authors have strong political opinions, and if they wish to persuade other people of the righteousness of their opinions or even galvanize people into action, in that way they are no different from other people with strong political opinions. As for entertainment and enlightenment, the classical functions of literature (drama), they may be in the eye of the beholder. I like to think my writing is both aesthetically and politically engaging — but ultimately readers are the judges of that. I like to think my writing, as well as that of other leftists, could have revolutionary impact, but could it — does it? Even “personal” writing is about the world and demonstrates social values (however implicitly). As for a faithful depiction of the (infinity of) human experience(s), or anything else, I don’t think live-streaming video presents one any more than instrumental music does. Likewise, I don’t believe a text could present a hi-fidelity recording of reality, even if its author wanted it to.

“Composer and I” and “Who Writes This Shit?” are self-contemplative, exploring the process of writing from the author’s point of view. On many levels, you seek to demystify the position of the writer. Would you agree, and if so, why do this?

Just as I’d like to think my writing could launch the revolution, I’d like to think it demystifies the position of the writer, because mystification (of just about anything) helps to reproduce a small elite body of judges and connoisseurs, those licensed to write and rewrite the codes (with respect to literature, in particular, these are codes of aesthetic judgment). Demystification could open up the playing field, at least theoretically. And after all, professors are not the only readers and writers, not by a long shot. But I’m afraid self-contemplation and demystification are not the same thing. I take for granted that any text comments on itself as a text and on textuality in general, as well as suggesting modes for its interpretation. My own conscious intent is to call forth intense readerly engagement and even activity, and my tendency is to be, myself, intensely conscious of text production. But the social location, as well as the very self-consciousness, of these texts gives the lie to my revolutionary pretensions.

There is a lot of humor in your writing, most particularly in “Kant Get Enough.” As you said in your cover letter, you like to “play.” Are you prone to punning in person? What do you think humor contributes to your writing?

I’d like to make three points about humor. Just joking. I am indeed a tireless (or tiresome, depending on whom you ask) punner in person. In general, I think humor is the driver of the chariot that pulls the sun up in the morning — and I’m deadly serious about that. Otherwise, the forecast would read: Nothing but war again today. In my writing, in particular, maybe humor energizes readers to keep working with prose that is often kind of challenging. I donut know.

Kissed By is your first short story collection, but you have published a scholarly work entitled Selling Out: The Gay and Lesbian Movement Goes to Market. Did you find the transition from academic writing into fiction difficult? Did you ever slip into “academic” speak?

The transition to writing fiction was pretty smooth — I wrote lots of poetry in my youth, and I’d kept up my punning all along. The difficulty was writing academically. I was highly motivated to get across certain ideas but I felt rather constrained by scholarly conventions. All those howevers and to the extent thats. However, like Academese, my fiction does tend toward the cerebral, the polysyllabic, and (so I’ve been told) the abstruse. To the extent that I fail to achieve a simple straightforward prose style, however, I cannot honestly apologize. I yam what I yam.

In my opinion, the most formally interesting piece in Kissed By is “Toward a Grammar of Guilt,” in which you use scientific diagrams to illustrate the pandemonium of September 11th. Do you believe that “form follows function”? Or do you agree with the Russian Formalists, who believe form to be superior to content?

Those diagrams are artifacts of the Reed-Kellogg method of teaching grammar, which originated in the 19th Century. Even into the latter half of the 20th Century, elementary school students, like I, were taught to diagram sentences when learning grammar. In “Toward a Grammar of Guilt,” as in many of my pieces, a narrator facing overwhelming emotion makes recourse to systems for organizing things, as though overwhelm could be managed — or contained — through the imposition of order (you might say form). The paradox the narrators face is that both the threats and the containment of them take place in language. Containment both succeeds and fails. These chosen systems, orders, forms, are intimately related to the particular chaos that is threatening. For any of these narrators, as for this author, form and function are mutually informing — distinct but inseparable. You can’t have one without the other.

Some of your work revolves around sexuality, which often emerges in complex, tangled forms. What place does sexuality have in your writing?

In “Please Compose Your Photographs More Carefully,” you contemplate the theme of amputation. Do you consider our society a dismembered one? Does that dismemberment parallel or precede the fragmentation within the individual?

<>I was thinking of amputation as a figure for loss in “Please Compose,” in which an early, profound, and compound experience of loss seems to condition the narrator’s habit of seeing amputation everywhere, or projecting it. She sees the dismemberment of her own family writ small everywhere, and also writ large, specifically in acts of war, or rather, in other people’s subjection to war. It is difficult to say which comes first — the dismemberment of individuals or that of large social bodies, so I guess I’ll say “parallel” rather than “precede,” unless “parallel” implies a lack of relation between the two phenomena, in which case I’ll say they’re “mutually implicating.” There is no individuation without separation and loss, and therefore no individuality not founded in fragmentation; likewise, there probably never was a society not conditioned by violence and rupture. Maybe we are individually and collectively dismembered, and maybe that is the condition of membership.

How do you take your coffee?

When do you know when a story is “finished” or close to being so? What makes you satisfied with a story you have written?

I am a mad reviser. On second, third, fourth you-can-barely-call-them drafts, I make nothing but changes. I call a story finished when the rate of revision has dropped to one or two words over the course of months. It’s always a bit arbitrary. What makes me satisfied? Sartre said that consciousness is doomed to go beyond the object that fills it.

Which book have you read the most times? Which book sat (sits?) on your nightstand the longest?

I confess I dig, and have always dug, the canon (although I think I was not a full-fledged person until I studied hard outside it), and I have especially immersed myself in The Modern European. Among Americans, the sentence writers get me: James, Faulkner, Stein. I am a believer in writing under the influence and my influences of choice are: Morrison, Doctorow, Pynchon, Nabokov. I get a wonderful sense of permission and hope from a number of contemporary experimental writers, particularly Raymond Federman, Carole Maso, John Barth, Suzan-Lori Parks, Diane Williams, Ben Marcus, Kathy Acker, and others — even if I don’t always experience pure unadulterated pleasure in reading their work. I hope I’ve learned something from the work of Tony Kushner. My very favorite writing right now is the thoughtful, fully-felt, word-wizardry of Anne Carson. But what sits on my nightstand, week in week out, is Soap Opera Digest; I thank God it’s a serial publication.

My favorite story in your collection is “Lynette, Your Uniqueness,” which documents a series of classified ads in which the writers’ hidden desires become public, while the writers themselves still retain their anonymity. It is a beautifully written work, tragic and hopeful all at once. I think it summarizes Kissed By as a whole remarkably well. Which story in the collection means the most to you?

Predictably, I can’t answer that question. “Kissed By,” “Potatoes You Ask” and “Composer and I” satisfy me as expressing intellectual/artistic/existential outlooks of mine. “Two Alphabets” satisfies my desire to unite form and emotional meaning. “Grammar of Guilt” and “They Come from Mars” excite me formally. “Lynette’s” lyricism gratifies my inner poet. The pieces mean different things to me. The collection as a whole book means to me that I get to go on to the next book!