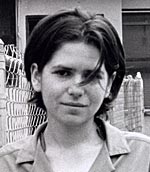 When did you begin writing? What were some of the first works you wrote?

Before I could read and write I dictated things to my father. A play called “The Ducks” I remember because I upset my mother. The cast was: Dad: King of the Ducks, Lucy: Queen of the Ducks, Lucy’s Best Friend: Princess of the Ducks, Mom: Servant of the Ducks. It was mostly about a swimming pool, I think. As soon as I could write, I started taking a yellow legal pad into the branches of the maple tree in the back yard and writing “Chapter Books.” Domestic dramas and adventure stories. Some narratives got taken over by recipes for potions.

Which authors do you look up to? Which are your favorites? Why? Do you try to draw ideas from their works?

I tend to have favorite stories and books more than favorite authors. In part because I read extremely slowly I tend to panic and think I better get a taste of someone new rather than read everything one person wrote. I also like the idea of falling for pieces rather than people, so I move book to book or story to story rather than through one writer to another. But I did read three Lydia Davis books in one year, which says something. I love Patricia Eakins because she doesn’t have to work her way into her language and imaginary places — she’s just there. Ben Marcus because something cool happens in every single sentence. Donald Barthelme. Ralph Ellison. Flannery O’Connor. Cheever. Shoot me, I love Raymond Carver. I don’t think people give him credit for being political.

What caused you to choose the dark subject matter of “psychokillers” for your novel?

I’d be walking along in my life and see one person do some little meanness to another person and under my breath find myself whispering “fucking psychokiller.” I just don’t think I write about anything that’s not dark. The last three stories I wrote were about the DC sniper, a bomb that blows up California, and a dead baby. I’m interested in what people do with their fear.

What was your inspiration for the main character? What aspects of your personality does she take on?

All my narrators start off me with a mask on and then evolve to suit the story. It’s true, I did take a hint from first novels like Oranges are not the Only Fruit (J. Winterson) and begin with sort-of-memoir, but then I took a hint from Woman Warrior (M. H. Kingston) and aimed to leave what I consider the not-very-interesting concerns of memoir as soon as possible. I tried to treat my personal history just as I treated plots gathered online or from movies or common culture. So I know my narrator is a character, but it’s still hard for me to see her as anything but an exaggeration of a few particular things about me. I’m no good at writing from the perspective of anyone I look at as alien to me. I feel mean if I do that, condescending. My third person narrators are, I think, exactly as much characters as my first-person narrators are. Narrators are what of me is useful to the narrative I’m after. There’s nothing this girl feels or believes that I have not, at least for a moment, been able to feel or believe. It’s just good that I’m gullible — I can believe almost anything for a while at least. Luckily I learn and grow.

There is a particularly resonant line in your book that says, “Anytime you’re dealing with beauty you attract assholes.” Does that line come from a personal feeling or experience of yours?

I’m glad you like that line. I think it’s true. I think beautiful things bring out the asshole in people. If there’s a beautifully frosted cake it can be very hard not to stick a finger in it. Didn’t you call dibs on sticking your knife in the new peanut butter? I guess some people stick a finger in the cake because they just love cake so much or are so sure it’s going to be that delicious, or it’s forbidden fruit or something. But some people can look at a cake and want to stick a finger in it because, I think, they are angry at the cake for being so lovely and not including or being them. So in two ways — finger into cake, cake into mouth — they get the cake (get it as in wreck it and get it as in have it.) It’s extreme selfishness, but very real, I think. There are other ways to think of this too … but you see this is exactly what I was trying to work out in the book.

Everyday Psychokillers is set in the intense atmosphere of Florida. How would you say that contributes to the mood of the novel?

I lived in South Florida for a couple of very intense years and the more I looked into Florida while writing the book the more I became convinced that it wasn’t just me — the place is intense in a way that’s emblematic of what terrifies me about the larger culture.

There always seems to be a dichotomy between what really happens and what is imaginary. For instance, “They’re in silhouette like cutouts, like paper-chain dolls. Like they aren’t real. But worse, they’re as good as real.” Do you find yourself trying to negotiate between the two in all of your writing?

Yes. What I aspire to in my writing, I think, is to be in an entirely imagined place, produced entirely by language. But I don’t start writing because I imagine something magical or other-worldly. I start writing because I’m frustrated with or confused about something I witness or experience and as a writer I somehow have to get to where I can do something with it, which is in the imaginary. This is why I admire Marcus and Eakins so much, I think. They’re in the heart of the book immediately, and the everyday not-book stuff hovers outside the pages. I don’t know how to do that yet. So far I can only start with my feet in this wrong, limp place that I love and that infuriates me and then work towards more interesting language/places which, again, is the only way I can discover anything that seems true or important about the literal world … it’s the only way I can do any good thinking.

In Everyday Psychokillers, nearly all of the parents seem to be extremely distant, to the point of being nearly nonexistent. Why?

It’s a book about disappearance (and abandonment and abduction …) and the adults are in various stages of it and the kids are watching as it happens, seeing the future. Plus I just think it’s true. They’re distant because they have to go off to work all the time and they have all these problems and stuff keeps happening to them. The adults in this book are wrong, ruined, freaked-out people. They expected to be powerful and are not. Or not even powerful, they thought they were going to be okay and they’re not.

Well, one way to respond would be to ask in a huff, “why are straight narrators straight?” There are answers to that question, too, but do you get my point? I also don’t think she’s preoccupied, because that implies that it’s problematic. Occupied, yes. I think people ought to think a lot about girls.

But second question first: Early in the drafting process I reread Lolita b/c I was thinking about psychokiller narratives as they relate to other kinds of captivity narratives. I wondered, “what if the world is like Florida and the Humbert figure is a woman? Do women do things like this to each other?” and I wrote the book looking forward to when I might get to find out. I also think there should be more queer narrators and more queer narrators who are busy with all kinds of things in their lives and minds while they are being queer. I didn’t want a book about being queer but I wanted a queer book. This is one reason I never used any identity terms for my narrator.

I think it’s troubling that you posed these two questions together, because I suppose another reason for a homosexual narrator is that homosexuals are so often confused with pedophiles which is really horrible. I don’t think you were doing this, but I do think it rubbed off (so to speak). Comes up all the time in psychokiller narratives, for one thing, and psychokiller-narrative-thinking, repeated and repeated as it is in this culture, can start to feel normal or true. Of course, that’s men, mostly, who are accused of pedophilia, but men are in charge of the terms and my narrator’s a girl. She does what she can with what’s around. I didn’t consciously choose a narrator, either. I just started telling stories and then there I was structuring a book around a girl’s series of almost-odes to girls and women, so why not just let her be gay? It’d be weird not to.

What was the most difficult part of writing your novel?

Final, final revisions, when I came to know everything I think is wrong with the book and everything I wish it’d be that it isn’t. But before that I was so happy and so in love with the thing the whole time I was working on it. It was hard to see it as a book with limits and failures.

What advice can you give to aspiring writers?

Nothing new. Read. Don’t confuse writing with being good or cool. Good cool people do everything they can to understand the world and try to make it a better place. Sometimes that involves writing, but if there’s a better way for you, do that.