Fall 2021 FC2 Release: By The Time You Read This by Yannick Murphy 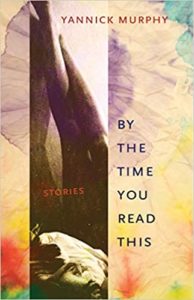 A gathering of luminescent stories that illustrates how fraught and contingent the simplest of lives can be, and the often unexpected means available to each of us for our own salvation

The truths revealed and the lives upended in the 13 stories that make up Yannick Murphy’s By the Time You Read This are at once singularly foreign and uncannily familiar. A wife pens a series of suicide notes to her family that verge on the comic, hovering between the tyrannical and the absurd. A mother obsesses over what her child eats. A young girl left with caretakers in New York draws on her potent imagination with consequences in real life that are both liberating and disastrous. In a college application essay a young woman finally begins to make sense of the troubling vicissitudes of her existence. A young French girl departs for America with her reprehensible beau to find she’s as much a stranger to herself abroad as she was at home. As with her previous novels and story collections, Murphy’s keen rendering of these disparate, complex lives illuminate in ways both quiet and startling our capacity for deliverance and devastation through daring acts of self-invention.

About the Author
Yannick Murphy is author of the novels The Call, Signed, Mata Hari, This Is the Water,Here They Come, and The Sea of Trees. Her story collections include Stories in Another Language and In a Bear’s Eye. She is recipient of various awards including a Pushcart Prize, a Laurence L. and Thomas Winship/PEN New England Award, a Whiting Writer’s Award, a National Endowment for the Arts award, and a Chesterfield Screenwriting award. Her story In a Bear’s Eye was published in the 2007 The O. Henry Prize Stories.
Reviews

“Darkly funny, brilliantly absurd, insightful, poignant, and often heartbreaking, the stories in Yannick Murphy’s career-spanning collection, By the Time You Read This, affirm her place among the best of our writers. Each is a wry, sparkling testimony to our struggles to connect in family, love, and friendship. Her narrators reach for ‘the speech of the heart,’ whether from the depths of a submarine, or in an extended suicide note. Like Rachel Cusk, Murphy has invented a language all her own.”
—Kate Walbert, author His Favorites and A Short History of Women

“Murphy’s canny collection (after This Is the Water) serves up an intriguing and illuminating mix of character studies. As always, Murphy’s cool, minimalist style is undeniably appealing.”
—Publishers Weekly

“Rhythmic and razor sharp, Murphy’s writing deftly catches hold of the lives of her characters in a glance and then, before you know it, delicately reveals them in all their pain and wonder. Whether she’s talking about a young man struggling with life on a submarine, a woman on the verge of turning her life upside down, or a neighbor watching the same video of his wife over and over again, she cuts quickly and deeply to the heart of what it means to be human and yet, even after that surgery, her characters remain whole and astonishingly alive.”
—Brian Evenson, author of Song for the Unraveling of the World

“A magic word is an elixir of happiness and there’s a rich little girl with a doll her size and an outsized dog who mothers kittens and a mother who jumps on a bed for fun—what’s not to like?—in these bewitching stories from the one and only Yannick Murphy! By the Time You Read This: read it soon.”
—Christine Schutt, author of Pure Hollywood