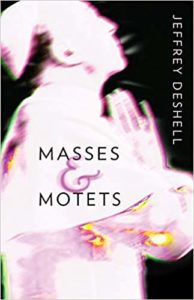 Masses and Motets is a tale composed of four basic interwoven threads, corresponding to the four-part choral writing of Pierre de la Rue’s service music. The first thread comes from the diaries of a recently murdered priest, Father Andrea Vidal, former secretary to the notorious Father Marcial Maciel. The second thread is the mystery story, a police procedural focusing on the efforts of Denver detective Francesca Fruscella to solve the murder and retrieve Vidal’s diary. The third strand is the story of Father Signelli, a priest sent from the Vatican to “fix” the murder. And the fourth strand explores the best and worst of Catholic culture: art and music created by Catholic artists and sexual abuse by Catholic priests.

Vidal’s narrative is the story of a priest who systematically, sincerely, and hopefully tries to destroy his very self through sex, drinking, and drugs in order to get closer to God. Fruscella’s story is that of a middle-aged, female detective trying to solve a ghastly murder while constantly battling the sexism of the Catholic Church. Signelli’s tale is that of an older career priest who, in doing the bidding of his superiors to fix problems that threaten the order of the Church, has perhaps compromised his own soul. By no means a simple narrative of wicked priests, this is a story of men who desperately want to believe, as well as a story of what this belief might shelter and cost.

About the Author
Jeffrey DeShell is author of the novels Expectation: A Francesca Fruscella Mystery, In Heaven Everything is Fine, S&M: A Novel, Peter: An (A) Historical Romance, The Trouble with Being Born, and Arthouse: A Novel.
Reviews

“Readers will want to see more of the intriguing Francesca. Those interested in issues facing today’s Catholic Church will best appreciate this one.”
—Publisher’s Weekly

“Jeffrey DeShell writes the only detective novels I want to read. Masses and Motets tore the top of my head off; I loved every word.”
—Benjamin Whitmer, author of Satan is Real: The Ballad of the Louvin Brothers and Cry Father: A Novel

“Jeffrey DeShell has managed to make the form of the crime novel erudite, challenging, and entertaining at the same time. What a wonderful trompe l’oeil, a true literary experiment and adventure. This is a truly fine piece of work.”
—Percival Everett
Order Now