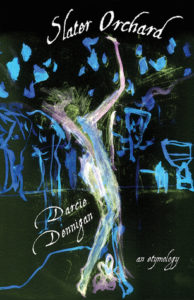 An intensely personal, surreal imagining of how humans might survive industrialization

In Slater Orchard, a cleaning woman navigates a half-imaginary world ravaged by industrial waste and pollution. As she labors to grow pear trees in a dumpster, appearances unravel around and within her, and the orchard becomes a burial ground. We begin to question both the reliability of the narrator and of consensual reality.

With sharp wit and precise diction, Darcie Dennigan calls on and works in the lineage of great modernist women, from Clarice Lispector to Marie Redonnet. Slater Orchard is thoroughly contemporary in its themes, however, evincing dire questions of rampant capitalism and climate change that are rapidly changing our world and the exigencies of living in it.

About the Author
Darcie Dennigan is an award-winning poet and playwright whose books include Madame X and The Parking Lot and other feral scenarios. She lives in Providence, Rhode Island.

“The experience of reading Slater Orchard is as gratifying as it is harrowing. We fall in love with the voice of its narrator, a young woman who seems to be learning to see the world as real only when she has words for what she encounters. But our attraction to the way she tells this story is quickly called into question by the horror of the story itself. This novel is genius in its commitment to tell the truth about our lives, that we live in and next to all forms of evil, that some of us lose ourselves so others might survive.”
—Jericho Brown, author of The Tradition

“The babies are dying and the river runs blue with poison, but two sisters maintain their mill for as long as they can, hopeful that something may one day fruit from the burial grounds of Darcie Dennigan’s brilliant Slater Orchard. As this environmental horror story unfolds, the cries of the dead and soon-to-be dead haunt the air which is already thick with poison, thick enough to drink. Dennigan’s formal display of airtight repetition and variation is scalpel precise and harrowing, a near-sestina in prose, each linguistic return gasping and breathless.”
—Joanna Howard, author of Rerun Era
Order Now