A hypnotic sojourn of planetary proportions through the terrestrial contingencies of bodies, health, poverty, and salvation 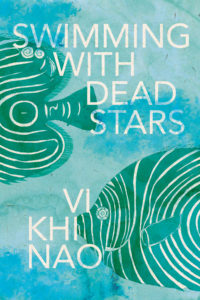 Maldon is an adjunct literature instructor at a prestigious East Coast university, with a deteriorating heart condition and no insurance. She finds herself caught between the demands of her job and the needs of her body, triggering economic and emotional strains that cause her to fantasize about taking her own life. But Maldon, who has pledged to safeguard her mother ever since their arrival in the US on a refugee ship from postwar Vietnam, has vowed to forgo suicide for as long as her mother is living.

In time, her heart worsens rapidly, and she ventures cross-country to a place called Cloud for the operation that may save her life. In Cloud, Maldon is joined by old friend planet Neptune, who is hermaphroditic, peculiar, and has agreed to accompany Maldon through the operation.

Swimming with Dead Stars is a hallucinatory meditation on the stars and planets, the precariousness of our existence, the cruel inequities of labor and healthcare, chickens and ice cream, and the grace that comes from enduring the physical and psychic pain wrought by pernicious social forces that enslave us all.

About the Author
Vi Khi Nao is author of the short story collections A Brief Alphabet of Torture and The Vegas Dilemma, the novel Fish in Exile, and the poetry collection, A Bell Curve Is A Pregnant Straight Line.
Reviews

“Vi Khi Nao’s Swimming with Dead Stars is somber until you start laughing, hilarious until you weep, and every single sentence contains the enormity, volatility, and devotion of a poetic and plasmic sun. Its radiance will leave you salty with despair and woefully, regretlessly hot.”
—Lily Hoang, author of A Bestiary

“At first, when reading Swimming with Dead Stars you wonder why the book exists. By the end you wonder why you exist.”
—Noah Cicero, author of Las Vegas Bootlegger: Empire of Self-Importance

“All of Vi Khi Nao’s books share a mythopoetic impulse and create together a world in which modes of being and art-making seem suddenly more recognizable in their elaborately evoked never-before-seen-ness. Nao reminds me of Antoine Volodine, not stylistically, but in her forging of genres that seem distinctly her own.”
—Joanna Ruocco, author of Dan

“Maldon is a very human character even as she is also celestial, mineral, elliptical in her orbit.”
—Sarah Blackman, author of Hex: A Novel

“Vi Khi Nao is an absurdist dreamer with a lacerating view of the world and its ills. Swimming with Dead Stars, a philosophical treatise on adjuncting, illness, and relationships, is ferocious and alive, like a monstrous field of technicolor flowers foaming at the mouth.”
—Patrick Yumi Cottrell, author of Sorry to Disrupt the Peace: A Novel

“Vi Khi Nao’s Swimming with Dead Stars teems with bodies—corporeal, celestial—churning and circulating, beating, and always costing: money or time or relationships. I felt each word of this book, so potent, bury itself inside me, and I buried myself inside Nao’s text, became entirely a part of her world. It’s that powerful.”
—Sarah Gerard, author of True Love: A Novel